St Martin in the fields 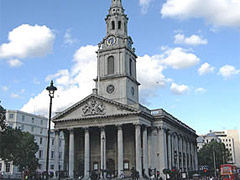 The first church on this site stood here in the thirteenth century, quite literally 'in the fields' between London and Westminster. The present incarnation of the church was built one hundred years before Trafalgar Square, where it now stands, and was designed by James Gibbs.

The design of the church was revolutionary and became the template for colonial churches right across America. The dominating steeple and columned face of the building were unique design features. The interior is galleried, like many Georgian churches, and it has two tiers of windows. The ceiling consists of gilded and painted plaster panels.

St. Martins is the official church of Buckingham Palace and St. James' Palace.
Thomas Chippendale, Joshua Reynolds and William Hogarth were all buried at St. Martins. During the First World War it became a shelter for homeless soldiers, and during the Second World War the vaults were used as an air raid shelter.

St. Martins is still at the forefront of charity and provides meals for London’s homeless. It now also has an acclaimed choir and often holds concerts with visiting musicians and orchestras. Admission is free and in the crypt visitors will find a café, gift shop and the London Brass Rubbing Centre. 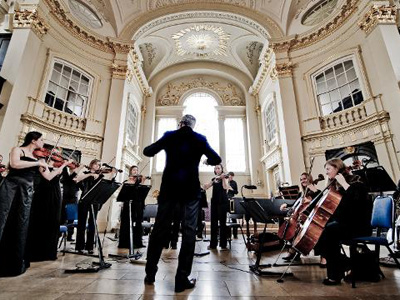 Enjoy a free gig in a church

A great platform for up-and-coming artists