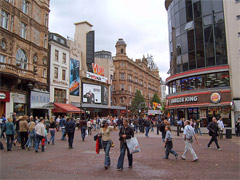 The pedestrianised Leicester Square is named after the 2nd Earl of Leicester, who once upon a time purchased this patch of land in 1630 and built himself a highly desirable townhouse. The fashionable address eventually gave way to entertainment houses, and by the 19th century it was home to theatres and hotels. Nowadays Leicester Square is seen as a bit of a no-go area for Londoners, as it’s mostly reserved for tourists or film premieres. Many high profile movies are given their first British showing at either the Odeon, Vue or Empire Cinemas; if you spy long queues of people and reporters you know what’s going on.

Around the square there are several tourist-focussed restaurants, the M&Ms shop (mecca), the Lego Store and other eye-catching stores. During the day, expect street performers and artists, whilst in the evenings ticket vendors try to sell you entry into one of the nearby nightclubs, theatres and other venues.

Reviewed by A.Hammond
I love Leicester Square. Definitely one of my favourite parts of London. Everytime I'm in London I have to go to Leicester. Whether it's for a meal, a film premiere, shopping or going to the cinema. There's something for everyone to do.

St Martin in the fields 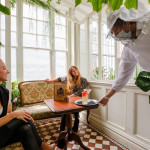