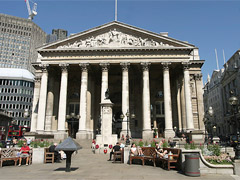 The grand façade of the Royal Exchange could easily be mistaken for an important historical attraction, however it is actually a designer shopping centre with equally upmarket restaurants (the centre courtyard Grand Café is owned by Terence Conran). The Royal Exchange is housed within a Grade II listed building which was constructed in the 16th century to accommodate the stock exchange, hence its name. It was devastated during the Great Fire of London and a second time after another fire in 1838, however extensive renovation took place on both occasions to restore it to its former glory. Despite its previous misfortune the building survived the Second World War bombings pretty much intact. It was opened as a shopping complex by Queen Elizabeth II in 1991 and underwent further renovation in 2001 to make room for extra stores. Today, it is home to Cartier, Tiffany, Agent Provocateur, Jo Malone, Gucci and Hermès among others, and there is a total of six eateries, offering a choice of French, Italian and Chinese cuisine. Its location in the Square Mile ensures a steady flow of corporate lunches and wealthy shoppers.