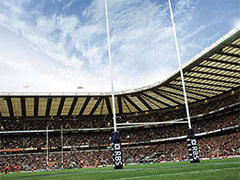 The area of Twickenham is documented as far back as 700AD and the name itself is of Anglo-Saxon origins. The Twickenham Rugby Football Club is one of a handful of clubs that can trace its history back as far as the formation of Rugby itself.

The club was formed when a press advertisement asking for the sons of gentlemen, below the age of seventeen to apply to Twickenham FC. The club formed three teams- the Twickenham lightweights, seconds and ‘Propers’. In 1893 a vote was held to decide whether Twickenham FC should play association football or Rugby football. It was only a narrow margin that voted in favor of Rugby- though now Twickenham and Rugby are as firm an association as Lords and Cricket.

The previous Twickenham stadium was the venue for England’s international Rugby games since 1910, although it was expanded and developed over the years. In 2002 it was finally decided that the existing stadium at that time was no longer fit for purpose, and finally in 2006, a brand new 80,000 capacity stadium was opened with restaurants, a hotel, conference facilities and much more. Visitors will find the Rugby Museum within its grounds which has been purpose-built and has many interactive features, charting the entire history of the ground and of English Rugby, including the celebrated England victory in the 2004 World Cup.

The tour of the ground also enables visitors to enter the players changing rooms and to take the legendary journey through the tunnel to the magnificence of the pitch.