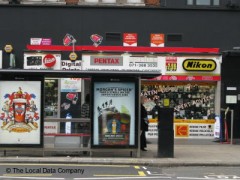 Spectrum sell various accessories for photography including batteries and films. They also sell a range of telephones. A film processing service is also available.

Reviewed by Jay from London
My advice in 3 words: DON'T GO THERE!

Worst experiences I've ever had in any shop in the country. I'd just asked if they had a Nikon D5500. In return I was treated like a 5-year old kid by the three bully salesmen. They interrogated me as if I had walked into a police station after a drunken brawl.

I'm an astrophysicist. I know a thing or two about optical instruments and I've known about the digital camera technology since before these men had even heard of them. Their manner of questioning was offensive &amp; intimidating. They even derided Nikon and Canon lenses, calling them cheap plastic, while promoting Pentax camera and Tamron lenses! Experts! While one of them kept me occupied with this grilling, the other one took my photos (without my permission) with different combinations of cameras and lenses to prove their point.

It was clear they didn't have the camera I wanted in stock, so I walked out. Shocking that these bullies are actually allowed to opera

Reviewed by tom from london
I ended up walking out without buying anything. Rudest sales staff I've ever come across.

I was ignored by all three of the unoccupied staff for a few minutes even as I was stood at the counter. When they finally spoke to me I asked for a specific lens, it was out of stock. Fine, not a problem. When I enquired about their usual price they replied with a sarcastic &quot;£2.50 (as if I was an idiot for asking)&quot;, awkward pause. Followed by 'I don't quote prices on out of stock items'.

I think you guys really need to sort out customer service skills. I'm trying to give you my money here!

Reviewed by Sam from North London
AVOID this place &amp; the childish salemen! Got bullied into buying tamron lens as they had no nikon lens. The box was dirty to which he shrugged his shoulders. After paying the lens were placed in a crumpled Tesco's bag...classy!!
I was given a credit note for £38 when I had actually spent £380 and valid for 6 months, so he scribbles it out &amp; makes the credit note look even more retarded. I demanded another credit note &amp; he refused. Finally after more brattish behaviour he re-wrote it but valid for 3 months. Will complain to head office but I assume I will get the same arrogant treatment.

Reviewed by Adam from London United Kingdom
I am after a compact camera despite owning a DSLR &amp; went to Spectrum for the first time today as its a dedicated camera shop as i thought i could get some proper advice - what a big mistake. the 'salesperson' was one of the most arrogant and rude people ive ever come across in a shop. im no camera expert but he rubbished everything i said and talked to me as if i was an idiot. Im not sure if he was trying to be funny or maybe had social communication issues but that is not the level of customer service i would expect anywhere. I walked out after a few minutes&amp; will not spend any money ther

Reviewed by Alex from London
Shame these people are allowed to keep that shop open. Appaling customer service or rather lack of it.. Rude, arrogant and knowing everything better than photography community at large. they'll go to any lengths to sell their trashy products.
Prepare to be treated like a complete idiot even if you do photography for living.
Regretting even those few minutes spent there
Save yourself a day of ruined mood and avoid those &quot;specialists&quot;.
shame there's no negative rating

Reviewed by Kaj from London
Over the years of usingthis shop I have never had a problem with thier staff or knowledge. It is a great shop to pop into and get advise

Reviewed by Laurie from Kent
The service was really good - I got a great deal on a new Pentax and the atmosphere was warm and friendly. The guy who served me was really knowledgeable and did not try and sell me a more expensive camera than I needed. I really recommend starting your search at this end of Tottenham Court Road in Spectrum!!

Reviewed by Robin Jacob
This is a shop which is a pleasure to visit. The people there are friendly, extremely knowledgeable and reliable. They really know cameras. They are not pushy salesmen - a real old=fashioned camera shop.

Like the previous reviewer I cannot believe the discreditable reviews - which look like the work of a jealous rival.

Reviewed by John R from Orpington
Wow, so many bad posts, odd they all seem to use the same language and be written in the same style ? I only discovered this shop in the last year as they are one of the few places that stock Pentax. I've been back three times and spent plenty of money. I've been into photography nearly 40 years, have been professionally selling for 27 and have run my own company or 10 so I'd like to think I too can recognise good or bad service. All I can say is I've been treated very well, had great advice and won't go anywhere else. Maybe they have new owners, who knows but they have some pro guys ther

Reviewed by CameraFace
Arrogant and patronising without a hint of professionalism. They showed disrespect to any unfortunate that ventured through their door. I'm a professional photographer, knew exactly what I wanted but was treated with disdain and aggressively harassed with regards to my request. A 0 rate is better!

Reviewed by dranicpone
I popped in to this shop looking for some sound advice, only to be met with the most arrogant, condescending and snotty comments. I knew what I was after, and had done my research, yet all my comments and points were scoffed at. Another member of staff made some embarrassing attempt to salvage what was obviously a ridiculous display of customer service, but only served to make things worse by telling me a load of nonsense.

I was asking about compact system cameras, and from my research believe some of the Sony ones to be the best. I was then told that they definitely wouldn't recommend these, they wouldn't tell me why though. I'd imagine it's because they don't sell them. And then, in the same &quot;I know everything, you know nothing&quot; tone as the first staff member, I was told that I had to buy Olympus, as they invented the system so must be the best. Absolute rubbish. Even when I asked about the Olympus brand out of curiosity, I had to prompt him to even give me some model numbers, but no offer to show me anything, either actual product or in a catalogue.

Absolutely would not even think about going here again. I didn't even see what their prices were like, I couldn't care less. With such appalling customer service, it's a wonder how they do any trade at all. I guess they can easily prey on vulnerable customers, bombard them with jargon and information, until they give in and hand their cash over.

Having run my own shop for several years, I know a thing or two about customer service...now, I'm not saying I'm any sort of customer service guru, but the fact that I walked out mid conversation says a lot. It's been a while since a retail experience has left me so disheartened. Seriously, this place is awful. For some proper, sound advice on cameras, I'd suggest heading to Camera World on Wells St in Fitzrovia, the place where I'll be heading to spend my money.

Reviewed by Mike Broom
I was standing outside the shop in Warren Street on Saturday 17th September 2011 looking at a Nikon lens in the window when I was drenched with water....one of the sales assistants was hosing down the shop front.....yes hosing down the shop front! I suggested that he should give warning and he said...it's only water. Rude..Arrogant...for no apparent reason....and I was not even in the shop! I have photographic evidence to back up what I have stated...avoid this shop at all costs...I have been in the shop once before, and on that occasion their service was less than good. I thought that I would give them another chance.....How wrong I was!
To the owners of this company you have just lost £900.00 of my custom....I doubt if they will bat an eyelid!

Reviewed by A Victory from LDN
An awful company. I am a huge supporter of small local shops and use them if I can. Usually this results in fantastic service although at a higher price. In the case of this shop, you can forget about any kind of service - they don't believe it. They are truly the rudest, most arrogant bunch of spivs and sharks you will come across. Please don't make the same mistake I made. Walk on past. Your life will be calmer for it

Reviewed by Anonymous
I would strongly advise any potential customer to use one of the many other competitors on Tottenham Court Road. I don't want to rant but one of my biggest regrets is buying from this shop.

I have encountered 5 of their salesmen now; all of them assumed I had no knowledge (or even intelligence) and tried to persuade / bully me into changing my whole system to another manufacturer (different manufacturer each time - and using arguments which often contradicted each other !). They tried each time to belittle my knowledge of photography and the industry (which I have been in for 20 years now).

Their after sales support is non-existent. They rubbished and mocked my claims that the flashgun was faulty without examining the equipment - just claiming that it must be &quot;user error.&quot; (Canon have since taken it back to be repaired through another dealer, found it to be faulty and replaced it for me).

If I had done what they wanted I would have not got a functional product that I wanted, and ended up with an entirely new photo system (for no good reason).

These men are the type of arrogant, nasty little salesmen that get decent salesmen a bad reputation. Avoid like the plague !