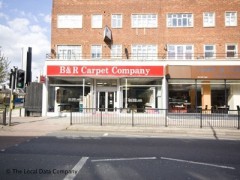 B & R Carpet Co supply and fit a wide range of carpets and vinyl. They also specialise in wood flooring and commercial work.

B&R Carpets go the extra mile, at every stage of the choosing and fitting carpets.

Reviewed by Lisa Cottam from Putney
The comments from a Chiswick customer are spot on. I had carpets installed by the Putney branch 10 years ago and the fitters were appalling rude and insulting. I rang the shop to inform them, thinking B&amp;R would want to know, but they were utterly dismissive of me. The salesman said, “We don’t employ them for their politeness, we employ them because they are good fitters”. I’ll never forget it. It is now time to replace the carpets and I will not be using them.

Reviewed by Janet Cooper from Chiswick
We bought a very expensive carpet to cover about 2,000 sq ft of our house. They were recommended by a friend of mine who had used them (and then later also had a bad experience with them). The man in the shop was very nice and helpful and all was great until the time of installation. In the end we had 3 different installation teams- all exceptionally rude, used profanity to such an extent that my builders were complaining and refused to do the work that the man in the shop had promised me even when I rang him to complain. One of them insulted me. The shop has no control over the installers who are not people you want in your home, particularly if you have children. There was also a detail on the carpet that I remember ordering and that the shop got wrong but because they did not write it on my receipt they made me pay for it (my friend had the same but hers was on her receipt which she found so she did not have to pay). The shop was informed and did nothing. Avoid.

Reviewed by Artemis Cooper from London
A brilliant service. They have a terrific choice of carpets and we were really well advised, and my emails / calls were always returned in the 3 weeks before the fitting. The fitters were impeccable: they were polite, friendly, cheerful, and did the whole job (stairwell and landings of a 4 storey house, plus big reception room and a bathroom) in a day - and when it was all done, they cleaned up and then asked if they could help us put back the furniture. I was very pleased with the quality of the work, and very impressed. Would definitely recommend B&amp;R to anyone.

Reviewed by Penny Cobb from Putney
Two years ago we got B&amp;R Carpets to fit a new stair carpet for us. It was a mid beige corded carpet. Within a few months we noticed black marks appearing down the sides near the wall and some in the centre. B&amp;R Carpets visited to inspect and took photos; they agreed at the time that something was wrong and said they would refer it to the supplier. In due course an inspector for the supplier appeared - looked at the marks which by that time were even worse and said it was being marked by our shoes when we walked on it!!

B&amp;R declined to do anything to help us apart from offering free fitting if we replaced it.

We had used B&amp;R as they have a good reputation within our area and were very disappointed by their attitude.

We should have taken it further but were so tired and disappointed by the time we got the suppliers ridiculous report (were we supposed to float up and down the stairs?) that we left it and are only now replacing it.

Reviewed by George from Putney
Somewhat complacent. Overcharged me on fitting costs by 300%. When challenged, were in denial and showed a complete lack of customer service. Lost my trust

Reviewed by HJF from Battersea
I recently had my carpet fitted by B&amp;R Carpets in Putney. Their price was the most competitive (after some gentle negotiation) out of 5 quotes, including one sole trader. The team of 3 guys who laid my carpet and took away the old one did an excellent job -they arrived on time, were polite and left the place spotless. The carpet looks great but after they'd left I realised a wheel had come off the bed. On calling B&amp;R and they immediately offered to pop round and remedy this and they did so promptly. Overall great service and would definitely recommend.

Reviewed by Ash from Putney
I was compelled to write a quick review based on reading what the person had said about samples and them not arriving. The free sample service is something offered by most carpet shops and having used B&amp;R and another shop locally the delivery of them is hit or miss largely due to the manufacturer that sends them on the shops behalf or the post service (which lets be honest is abysmal). when mine didnt arrive i rung B&amp;R and they loaned me shop samples to make up for it which is something the other shop didnt offer. the missing samples turned up eventually clearly having gone astray in the post

Reviewed by Phil from Putney
We went into the shop 3 weeks ago, A very helpful man showed us the products we were interested in Marmoleum. We gave all our details and he said that the samples would be sent out. They did not arrive phoned supplier direct and got samples in a week. what a shame as we will now order from another supplier.

Reviewed by pamwal
Used B&amp;R to carpet stairs and bedrooms twice and the quality of the carpets and installation is second to none. They have also fitted bathroom flooring. I wouldn't hesitate to recommend them. They are friendly and very helpful. Fantastic selection of carpets and other types of flooring.

Reviewed by brettA
We have used B&amp;R carpets twice now and the service has been excellent. They have a great selection and have always been excellent in notify us of dates and the carpet installation was top notch. We recently had our entire house repainted white inside and they were able to remove the old carpet and install the new one without any damage to the newly painted walls. B&amp;R were very helpful at the selection process making sure we selected the right type of flooring taking into account the intricacies of our property. We would highly recommend them.

Reviewed by Putney Local
I had used this local company several times so quite trustingly I handed over a cheque for £1,500 for stair carpet and let them get on with the job. The carpet supplied was mostly fine but in an area it was marked with a distinct line and the fitting in 4 places was frayed, bumpy just cut off and banged in. I was amazed because they had always been good quality, no problems.

I showed them photos and asked them to come round to look. When I asked them to remedy the problems the response was completely surreal. They just didn't know how to deal with an unhappy customer. It would have cost very little to fix as we had spare carpet. Why not just say sorry let's put it right. I'd have paid extra just to get it done properly. They would not speak to me on the phone, threatened me with the police twice, in case I came to the shop, before finally making an appointment to make good. They changed the date repeatedly and then finally on the eve of the date they were due to do the remedial works (5 weeks after taking the money) they sent me a letter refusing to have anything to do with me. There was no apology, no discount and no making good. I can only think they are having financial difficulties and they are not looking to their long term business. DO NOT PAY CASH IN FULL IN ADVANCE as I was nothing to this company once my cheque cashed. Stupidly, I trusted them. It was a really upsetting experience.

I didn't even get quotes elsewhere, I didn't mind the cost (I expected it to be more expensive that elsewhere) but I wanted quality and a company I knew. Instead I got marked carpet, shabby fitting (in places) and much much worse this odd distressing behavior and ranting about the police?! I felt so stupid to have been so trusting. Its John Lewis from now on and a conversation with Trading Standards.

Be careful in recessionary times people want your money not repeat business.

Reviewed by Anonymous
We had our house recently carpeted by b&amp;r and the service and quality was excellent. They advised us on underlay and we are really pleased with results. Definately happy to recommend.