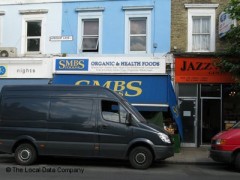 Reviewed by GMoore from New Cross
I've been going to SMBS and Cheese Block for about 25 years. I absolutely love it. The stock is of highest quality. It's more expensive than many, but always much better than the supermarket blandness. The family really knows about food - they are experts. Ask them anything. They are friendly if you make the effort - the guy in the Cheese Block has become positively chatty with me, but it took about 20 years. I actually rather like that. Go to SMBS around closing time when they pump the music up as they pack - the atmosphere is quite different. It's a local gem and I love it.

Reviewed by catfaceface from East Dulwich
I like to get groceries and not be bothered, so I'm not fussed about the apparently unfriendliness of the shopkeepers - I only really interact with them at the checkout, and that's fine. Otherwise, this shop has a really good selection of stuff, including many different types of raw, vegan chocolates, nut butters and indian spice mixes. Very good fruit and veg selection as well, with sprouts and varieties of plums and strawberries when in season, even cobnuts. I understand why people think the staff are a bit curt, but I really prefer that to having to converse in shops.

Reviewed by Simon from Peckham
I think the allegations of surliness are unfair! Make an effort and they can be fairly charming. Selection is great. It's pricey though... But at least your money isn't going to a supermarket giant

Reviewed by Celia Phillips from East Dulwich
As some of the other reviews say a nice selection of fruit and vegetables some organic and a lot of vegetarian products which is a plus. However the rudeness and surly nature of the staff takes one aback. Perhaps they would be better hiring some politer friendlier staff to work on the tills. My most recent visit there ruined a nice sunny day because of there rudeness. I will now be frequenting the organic shop on northcross road who have a lower quality of produce but their customer service is much much friendlier and helpful.

Reviewed by Susie from East Dulwich
Staff aren't friendly. Produce and range of stock is fantastic, hence a 7..

Reviewed by Jim from Dulwich
Excellent produce, some of the best around, but delivered with a surly, abrupt attitude. It's a real shame. I've worked in retail &amp; service my whole life &amp; know its easy to become a bit jaded serving people, but put your poker faces on guys! You're not doing us a favour being there, we are for shopping with you. Otherwise an excellent, if a little expensive, shop where you get what you pay for but not with a smile.

Reviewed by MB from Dulwich
In the past I have found the friendly touch almost pointedly lacking in this shop, so I have bought elsewhere.
However, I went back for the first time in a couple of years recently and there seemed to be a better atmosphere. This place could be brilliant, as the quality of the food is excellent.

Reviewed by Ramble
Lovely family run shop. I think it's unfair of the above poster to assume they would be a delivery service. Great produce, great stock and always helpful.

Reviewed by whats wrong with sub
What an incredibly surly and rude member of staff I had to encounter on the phone. I have lived in Dulwich and shopped locally for over 2 decades. I have for many years bought 2 boxes of mangoes when in season in the month of May, one for my family and the other for an elederly couple. I have now moved a considerable distance away from Dulwich but still wanted my dear friends to have a box. I called this morning and an incredibly unhelpful mann answered and said they didnt do any organic mangoes. What he didnt elaborate on was that they did do boxes of mangoes and were in stock but not organic. He put the ph. down and I was taken aback. I continued to search the web and someone at Ed Deli very kindlly said it was SMBS that did them.. I called back and said Im sure you do the mangoes and he said yes we do but not organic! I said you could hv said that! I asked if he would deliver to the elderly couple in Dulwich Village and I would pay, but he just said no. So much for community service! I wouldnt go there if it was the last shop left on the planet, for being spoken to by someone as rude and unhelpful as Mr. SMBS!