Best places to spend a warm day (or night)

When the weather is nice (an infrequent phenomena, we know) here's where you should be heading... 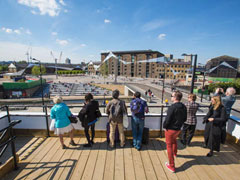 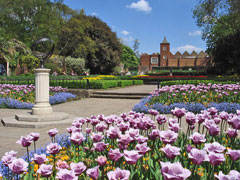 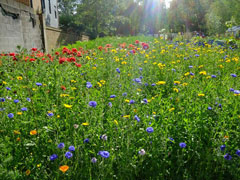 Viewpoint
Although it’s traditionally been known as a hub of transport and industry, King’s Cross is surrounded by a surprising amount of wildlife. A team of smart Finnish architects have designed Viewpoint, a typically Scandi-looking floating island on the Regent’s Canal nestled among the trees and birds that spill out of Camley Street Natural Park. Take a picnic and keep your eye out for ducks, swans and the odd kingfisher.

Old Truman Brewery
The Sunday Upmarket at Brick Lane’s Old Truman Brewery is where East Londoners nurse their hangovers with the help of strong coffees, healthy smoothies and street food from around the world. On warm days hundreds gather on the astroturf to snack on empanadas and okonomiyake, while the indoor market sells vintage clothing and jewellery.

London Fields
If like most Londoners you’re not fortunate enough to have a garden, you’ll be wondering where you can fire up a BBQ once the sun comes out. Many parks don’t allow them but at London Fields you can, as long as you keep it on a metal stand. Additionally, Islington council is the only one to have entirely lifted the ban on barbecues, so you’re free to grill your sausages and halloumi on skewers in any green space in the borough.

Regent’s Park Open Air Theatre
Sheltered among trees in Regent’s Park, this is London’s most charming theatre. Watching your favourite play as the sun sets while the spotlights come on is an unmissable experience. Past productions include To Kill A Mockingbird, Into the Woods and Twelfth Night, and they occasionally host concerts too.
\n\nEpping Forest
We don’t need to go into the unpredictability of the British weather here, which is one of the downsides of taking a staycation. What if there was an option that was cost-effective while still adventurous, but with the added bonus of being able to return home in a jiffy if it turns out to be a soggy weekend? Camping in Epping Forest means you can be at one with nature: sleeping under the stars, taking walks in the woods, lighting campfires and cooking outdoors, all just a short distance from the Central Line.

Alexandra Palace
Aside from being able to watch films outdoors, the best thing about drive in cinemas is that you get to chatter with your mates without annoying your neighbours. And drunkenly sing along, which is exactly what you want to do when watching Grease, a favourite at Ally Pally’s Drive-in Film Club. You also benefit from cheerful staff on skates who deliver hotdogs and popcorn to your car, American-diner style.

Holland Park
Every summer since 1988 Opera Holland Park erect a temporary theatre in the west London park to provide a casual, alfresco setting for operas like Aida. More accessible than your usual opera house, there’s no need to worry about a dress code, picnics are welcome, and so are children, as concessionary rates are available for under 16s.
\n\nHyde Park
What could be more serene than pedalling on the pretty Serpentine Lake in Hyde Park on a sunny afternoon? Pedal boats are available for hire between April and October. Alternatively on a really hot day you can jump in and swim, unless you’re as brave as the members of the Serpentine Swimming Club, who brave the waters all year round.

Royal Victoria Dock
So it’s not quite the Med, but the man-made sandy beaches that have been popping up on the Thames in recent years make for a nice, cheap way to enjoy the sun. The biggest one is at Royal Victoria Dock. Sunbathe on the deckchairs, play in the sand and if you’re feeling very active you can make use of the watersports centre’s kayaking and rowing facilities.

Elephant & Castle
Guerilla gardening is a gentle form of activism, led by people who are reclaiming public, unused patches of land by planting flowers. Locations can be abandoned stretches of field, community garden projects on rooftops, and even the plots where trees grow on pavements. Perhaps due to its unappealing concrete junction Elephant & Castle is a particular hotspot for guerrilla gardeners; their work includes vegetation in the centre of the roundabout and a field of lavender near Lambeth North tube station. However there are many other existing gardening groups around the capital for you to join, or you could even start your own. 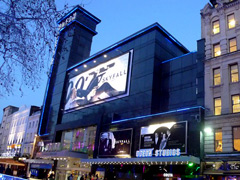 A brief history of Leicester Square’s cinemas
No better place to catch a flick in the capital...