Here we find out for ourselves, how to be in a musical with the current star of award-winning show 'Wicked' 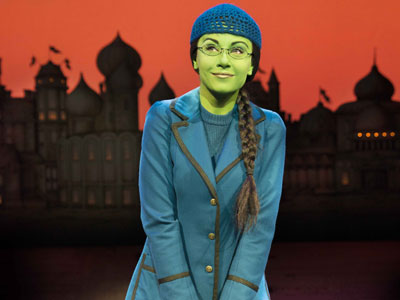 Emma Hatton is currently starring as Elphaba, the not-so-wicked witch of the west in the award-winning musical Wicked. Based on Gregory Maguire’s 1995 prequel to The Wonderful Wizard of Oz, the show’s heart-warming story and incredible theatrics have made it one of the West End’s longest-running productions. Here Emma tells us how she prepares for one of the most demanding roles in Theatreland.

I love the fact that Elphaba is very feisty. She isn’t afraid to stand up for not only herself but for the greater good. She’s prepared to put herself out on a limb even if that makes her unpopular with other people and I think that’s such an admirable trait. I wish I was a bit more like that.

Elphaba is an all-consuming role, physically, emotionally and vocally, as you’re rarely off the stage. You have to remember you have a life outside of the show otherwise you lose perspective, you dwell on things, and you give yourself a hard time. You need to be able to close the door and if you have a particularly tough show put things behind you and move on.

Doing the show is like a muscle, you learn how to pace yourself. Now that I’m doing it everyday I know what I can and can’t do during the day. I can’t do a 10 mile run anymore like I used to do when I was training for the marathon!

To look after my voice I drink plenty of water. I love coffee but I have to limit caffeine because it dehydrates me. I tend to suffer very badly with acid reflux which unfortunately has quite a big impact on singers, so I have to avoid spicy and acidic food and eating too late at night, although sometimes I ignore that one as it’s quite tricky with the hours we work. Then there’s being in a loud bar or loud club. The socialising and the alcohol aren’t the problem, it’s the straining of your voice. I have a vocal steamer, most singers have got them. It’s ceramic and you put it in your mouth and it puts steam directly on your vocal chords.

After each performance I have to shower to get all the green off. Then I go to see if there’s anybody at stage door who’s come to get autographs or photographs, and spend a bit of time with the fans. Then I’ll get my train home, or sometimes I’ll go and meet some friends in town for some food, but generally throughout the week I tend to get myself home, get a box set on, have a cup of tea, have a bath and just wind down.

We get Sundays off and we do two shows on Wednesdays and Saturdays as well. Sometimes it’s quite difficult to make solid plans for the weekend because you just don’t know whether you’re going to be able to keep them or not. It’s all very well pushing through but when you’re stood on that stage in front of 2,500 people you think “I probably shouldn’t have gone out for a meal last night and chatted for four hours.”

I’ve fallen over on stage multiple times but apparently that’s a good sign. If you fall over in the theatre it means you’ll play that theatre again.

I’ve forgotten lines which is awkward although thankfully not in this show. The trick is not to panic, because then you lose all sense of what you’re doing. A lot of the time the audience don’t even notice, so the important thing is not to beat yourself up about these things because they will happen. And actually it’s quite nice for the audience to see that you’re not something other than human.

When I’m learning a new role I really familiarise myself with the script and my relationship with the other characters. I try and get a grasp of who my character is, what kind of person she is, what kind of relationship she has with other members of the cast, and what journey she goes on. I also try and make notes of anything I don’t understand so I’ve got those questions prepared for the directors.

You want to make sure you’re being true to what the writers want, but to approach the role I look at the situation and the emotion of that character and try to relate it to something I’ve experienced myself. It’s very method but it’s not that deep, and it’s not necessarily a conscious thing, sometimes I’ll be on stage and just the reaction of some of the cast can bring up memories or feelings I’ve experienced.

I don’t read reviews of my shows. I’ve reached the point now where I realise that you won’t please everybody and the line of work I’m in is very subjective. I have had some pretty nasty comments in my time and all they do is knock your confidence. On the flipside of that if you read too many positive things about yourself you start believing the hype and you get complacent.There will be some people who come and watch it who don’t enjoy what I do but my answer to that is if you think you can get up there and do a better job by all means have a go.

I would probably say that I’m playing my dream role now, which is an amazing thing to be able to say. I would love to get my teeth into Eva Peron in Evita. I was lucky enough to play one of my other dream roles which was Scaramouche in We Will Rock You, I feel like I ticked that off the bucket list. But yeah, Elphaba is pretty high on the list.


Wicked has been shortlisted for ITV's This Morning Audience Award in the 2015 Olivier Awards. You can vote here: www.WickedTheMusical.co.uk/Vote