Ghost is inspired by tech noir and science fiction classics such as Blade Runner, Ghost in the Shell and The Matrix 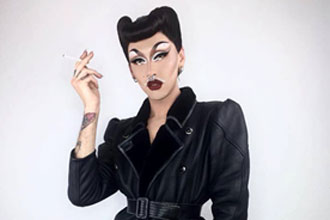 Born out of the underground wave, goth and techno scenes, Berlin-based performer Ghost is inspired by tech noir and science fiction classics such as Blade Runner, Ghost in the Shell and The Matrix.

Blending her love for fashion with her liking for bondage and fetish, her aesthetic is sensual, dark, and edgy. We chat to Ghost ahead of her debut show at Berlin Berlin Saturday October 20th at Egg LDN.

Joining Berlin Berlin for the first time and for those that have never seen you perform how would you describe what you do and do you like to shock your audience?

Aesthetically my look and show is a cross between 80s fashion like Thierry Mugler who I love blended with fetish wear, blended with science fiction and tech noir classics. Tech noir meshes cyber punk and science fiction with film noir movies with my favourite example, the movie ‘Blade Runner’, which is one of my biggest inspirations. Other tech noir faves are ‘The Matrix’ trilogy and ‘Ghost In The Shell’. Overall it’s about putting all these textures and their sensual aspects together.

Gothic, techno, wave, 80’s music are all influences that are mixed into my visual identity. My aesthetic style is more edgy, fashion forward and definitely more dark. I like to surprise my audience rather than shock them and I draw them in with my stories which often take a stance on things and I embrace all these different sides through a performance. I also like to use lights, projections and props.

You're part of both Berlin’s Night Shift and Whatever events and also Paris’ Tech Noire; can you tell us how you came to be involved and what have been your highlights so far?

I co-produce the Night Shift and Tech Noire events as well as other shows and it all started when I was living in Paris and felt frustrated that these alternative events weren’t catering to all of my interests. I’d always loved drag but didn’t feel it was compatible with the alternative scene and so I would go to both types of events but look different for each scene. From there I started imagining an event that would blend both worlds together and two years my partner and I decided to give it a try with Tech Noire. We then moved to Berlin and decided to launch Night Shift and now we produce 1 event a month and alternate between the cities.

Highlights - well I feel hugely blessed to have met and worked with some of my alternative heroes including Boy Harsher and Paradox Obscur and also book all my favourite drag artists from all over Europe. People who have no idea what dark wave etc is come to our events and it opens their eyes to a whole new scene where they can discover new artists and music and we’ve created a safe space for the community to explore all these influences. We get male, female, transgender, binary - everybody’s welcome to come and feel comfortable in our parties, and I’m really proud to have created that.

Does your unusual name have any special resonance and are you into all things other worldly?

I had my birth name and Ghost was my name when I was a club kid living in New York and I was wearing a lots of white face make up style looks. It fits my aesthetic and my inspirations.

Where and when did you start performing and why does your style hold such allure for you and for an audience?

I started doing drag performances two and a half years ago and the first time I tried it a friend put me in drag. I’d known about drag in New York, had lots of drag queen friends, I was watching Ru Paul’s Drag Race’ but I didn’t think it was for me. I really enjoyed my first experience and one thing led to another and I started performing.

The first time I performed at a party was in Paris at Je Dit Barie and it was very nerve wracking and from there I started performing at other events and then we started Tech Noire where I perform and host.

What really attracts me when I work on my looks is materials such as vegan leather, latex, and vinyl because of my love for fetish imagery. I strive to create nice shapes and beautiful contrasts and always be edgy and surprise people with my looks. Especially since the success of performers like Dragula and Vander Von Odd, its cool for artist like me to blend the creepy, the horror and the fashion forwardness.

Which performers and artists did you look up to when you were starting out?

As far as artists I think I’ve always been inspired by people who really push the boundaries of gender, imagery and aesthetics. People like David Bowie, Madonna, Pete Burns and Lady Gaga are four that I really admire. They’re creative artistically in all forms..the make up, the hair and on stage they have this huge presence which is essential.They’re outrageous, beautifully artistic and it all comes to life on stage.

Drag wise my biggest inspiration is Sasha Velour and also, Violet Chachki. I think they’re very fashion forward, very creative, very beautiful, their artistry is amazing and they come up with gorgeous amazing looks especially Sasha Velour, and she’s really the kind of queen that I aspire to be. Not only is she artistic but everything she does is her own creation and she puts it together beautifully and is also an incredible performer. Off stage she’s an ally, she fights for the LGBT community and shares a lot with the world and to me she has it all. As far as aesthetics I admire Sasha, Violet and other queens leading the way are Sharon Needles and La Croya.

Known for some incredible outfits and unusual imagery coming into play where do you get your inspirations from? Do you create your own outfits or do you work with specific designers?

Any kind of cyber punk futuristic aesthetic inspires me. When we think about the future and fashion, we think about very crisp shapes, very weird materials and fabrics and that inspires my drag plus any kind of powerful woman character in any sci fi/futuristic movie. Creating my vision in real life I do have designers that help me, a couple of hair stylists as well as Harle Quing who has been doing my costumes mostly. We brainstorm and then she creates outfits for me and she’s also a drag queen.

How would you you describe what you do?

My performance style as sultry, sensual, edgy and I like tell as story and take a stance. whether political or societal. I don’t just pick any song, I pick one that has a meaning…the lyrics have meaning and create a whole show around it. I don’t use props for props sake only if it works. I’m a good story teller and I like to share my emotions and thoughts through my performance.

Sum up what makes a good party performer/host and do you follow any other performers/club kids or artists?

What makes a good host is someone that can interact with the crowd and that’s quick witted and good with words. I’m a good talker but if you feed off the audience’s energy it will be fine and you can bounce off them and make them laugh, you need to feel comfortable and relaxed then the audience will be and everyone will have a really good time.

Anyone can be a great performer as long as you do what you’re good at it and do what you love.

As part of the LGBT art scene and community in Berlin do you think you’ve ever faced setbacks in your industry because of who you are?

Surprisingly I’ve met with more success anywhere other than imy own cities.When I first started people didn’t believe in me or understand me and it was hard to find gigs. Now I’ve given myself my own stage with my own parties some people think I’m not interested in doing anything else. My events are more alternative, so people don’t trust me to do something more mainstream and to do something outside the edgy box which isn’t true. It’s been quite frustrating to not be able to share my art in all its entirety in Paris and Berlin, and funnily enough I’ve had more luck finding more gigs, finding my crowd and people that like my show in places like the UK and USA.

If you produce your own shows you’re going to have to try and change this perception as it’s always fun to share your art with different crowds, get on different stages and meet different queens.

A real highlight was going to Amsterdam’s Milk Shake Festival and I met so many international queens and audiences that knew who I was and really enjoyed me and really embraced me for who I really am. I’d never really experienced that before and it made me realise there are people out there that really enjoy what I do.

People have a hard time connecting in the digital age being so connected to their phones and social media. We’re not talking, sharing and I think going to the club and seeing artists/drag shows is a really good way for people to connect. On the other side reality is so shitty and social media is a way to share that these day. It’s always been shitty and people were ignorant about what was going on in the world before but now we’re all aware and so people need an escape. Sometimes you need to take a break and that’s why you go out and dance and put your energy out in the world and breathe for a second.

Drag is a great form of freedom because as performer I get to share my thoughts on stage but people can come also come and be entertained and forget about their day and what’s going on. Music is another way for everyone to release their energy and have fun.
Drag is a never ending source of artistic expression and it’s great that its becoming so mainstream. So many people have more fun, forget about gender norms and be more free..men start wearing make up. Drag is something that really opens people’s minds to everything and anything we could do if we could forget what we’ve been taught and what society has forced us to be.