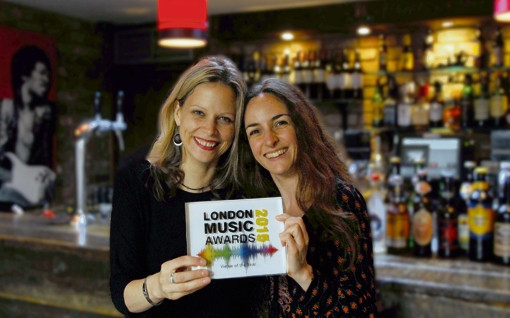 When the lockdown started in March last year, the owners of the award-winning live music venue Green Note in Camden Town, North London, set out on a survival adventure and in the process created a new worldwide audience.

Like the rest of the entertainment industry, Immy Doman and Risa Tabatznik had to close their doors and face a future with no income. So, they created a new plan to keep their business going and keep in touch with their loyal supporters. In the process they found they had created a new audience for their live music shows across the world.

They are now gearing up to re-open Green Note’s doors to live music fans this month (May 2021) for the first time in over a year and it will be a show with a difference. That’s because it will be available as a livestreamed performance to the unexpected worldwide audience of thousands of new fans across the world that Green Note has acquired during lockdown, as well as to the small audiences at the tiny, but legendary music venue.

Passionate music lovers, Immy Doman and Risa Tabatznik, have expanded their business by inventing Virtually Green Note, a twice weekly programme of more than a hundred live performances streamed from the homes of singers and musicians. “Over the course of this year we’re proud to have curated and broadcast over 100 virtual shows, paid out over £65,000 to over 300 musicians, and been able to provide work to many of our freelance staff.”

Immy and Risa are very proud of their livestreaming programme: “We came up with a unique format for the shows that proved to be very popular with artists and audiences, and we kept developing and refining the shows as the months went on, so that by the end they were pretty slick and professional, but also retained a sense of intimacy and our personal touch, which is such an important aspect of Green Note."

“We were also meticulous about the sound quality and did various sound checks with artists before they appeared on the show, so as to rule out any potential technical issues. The superior sound quality, as well as the interactive element of our shows are two aspects that were appreciated and frequently commented on by both our artists and audiences."

The Virtually Green Note programme has kept them in touch with faithful friends and also created a new audience across the world with up to 4,500 views on YouTube per concert.

Immy Doman says: “We’ve developed a global audience for our live streams, with people regularly tuning in from across the UK as well as other countries, including the US, Canada, Australia, New Zealand, Argentina, Brazil, Japan, South Africa as well as many European countries."

“Our hopes for the future are to return to a safe but atmospheric environment for hosting live music at our bricks and mortar venue, but also to harness the energy and audiences we’ve gained this year further afield, who aren’t able to come to the venue but are keen for us to continue with some form of online shows.”

The first test of this new business model will be on Friday 28 May when 'Our Man in the Field', the London-based actor/singer-songwriter Alexander Ellis, will perform live at Green Note to a tiny socially distanced audience of 18 people and a much larger livestream audience. This event is a test run for the Green Note relaunch at the end of June when Newcastle’s swing-honkytonk-rockabilly band, Rob Heron and the Tea Pad Orchestra, will play to a full live audience plus a livestreaming audience on Friday 25 June 2021.

“The problem for small venues is that it isn’t financially viable to run events with a socially distanced audience.” says Risa Tabatznik. “So, we’re doing the test event at the end of May to make sure we’re all OK technically before our relaunch a month later. After that we plan to be back to performances 7 nights a week.”

As well as creating a new paying audience for live streaming events during lockdown, Risa and Immy have had donations from loyal supporters, and they have also had to learn how to apply for government grants. They acknowledge that assistance from the Music Venue Trust enabling them to receive Government grants from the Culture Recovery Fund, the Arts Council and the Coronavirus Job Retention Scheme, has been vitally important to their survival. “We couldn’t have kept going without the Music Venue Trust advising us on Government help” Risa says.

“Thanks to Arts Council funding, we’ve been able to survive through this period of closure, and thanks to a grant from them we’re excited to be reopening with our ‘Cool Women’ programme: a season celebrating female artists and frontwomen, which will run from July to October 21 and include artists such as Vimala Rowe, Katy Rose Bennett, Katey Brooks, Baskery and the Heard Collective amongst others. In an industry which is still male dominated, we're proud to be supporting and promoting women in music - an area that is close to our hearts. We are feeling positive about the future mixing live events and livestreaming.”

This article is connected to Green Note
Share on