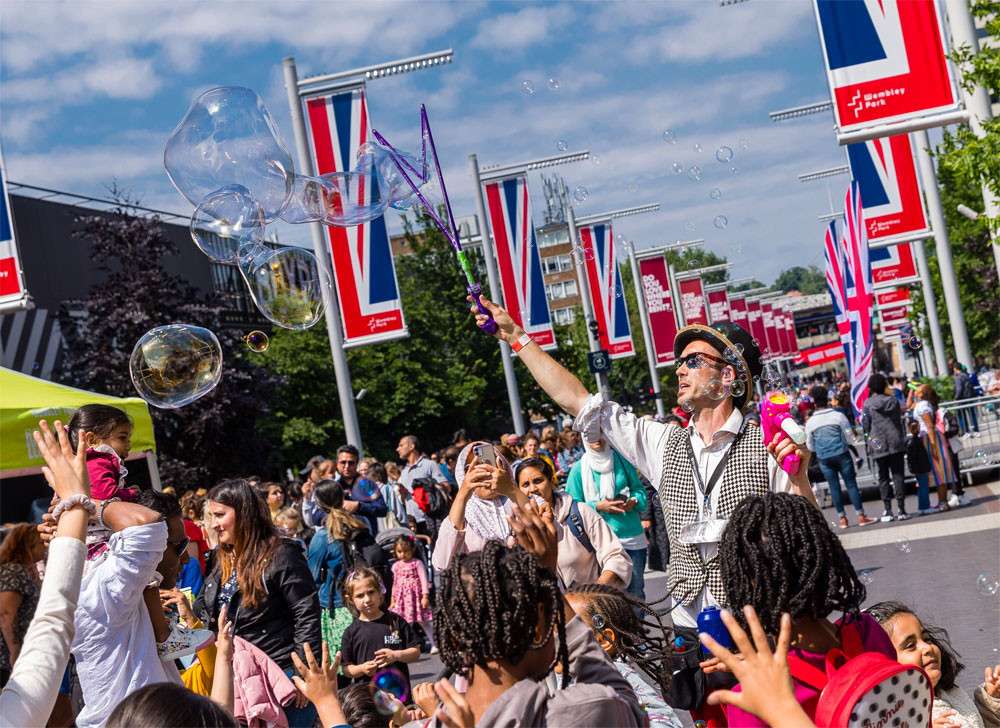 Celebrating the multicultural nature of the community through dance, from Soca, Reggae and Afrobeat vibes to the beats of Bollywood, Wembley Park took partygoers on a tour of music and dance styles that have deep roots both around the world and within the diverse borough, where 150 languages are spoken.

With over 2,000 visitors partaking in the free group dance classes, and over 5,000 overall event goers the Jubilee Dance Party was a huge success, welcoming the return of free, live events in the neighbourhood after the pandemic.

One of the highlights was the Caribbean Niceness dance class delivered by headline dance partners Rambert, Britain’s oldest dance school, whose faculty teacher Sheba Montserrat shared not just her moves but insights into Caribbean and Black British history.

Jubilee partygoers were also treated to an outstanding performance from Bollywood Dance School, with over 100 performers showcasing and sharing their moves. Other highlights included local dance legend Edoardo Lima, Swing Patrol, MoreYoga and Zumba teacher Jonas Hedqvist, who provided energy-packed insights into dance styles from around the world, all of which have taken hold in the Brent community over the years.

Professional dance company and Britain’s Got Talent semi-finalists TNG (The Next Generation) also delivered a visual spectacle to delight partygoers from across Wembley Park and beyond. “The Queen has seen a great deal of change in Britain over the past seven decades. Our country is benefiting from increased diversity in myriad ways, and we are delighted to be able to celebrate that here at Wembley Park, with different cultures coming together and creating something spectacular to mark the Platinum Jubilee.” Josh McNorton, Cultural Director, Wembley Park

In addition to the dance events and live music on the day, partygoers contributed to a stunning digital photo portrait of HM Queen Elizabeth II by uploading their images taken on the day.

Families also enjoyed bubbleologists, horse guards stilt walkers, face painters, jugglers and circus skills demonstrations, pavement artists and performances by a children’s entertainer, with visitors of all ages and backgrounds embracing the party spirit. For more information visit wembleypark.com, find us on Facebook or follow us on Instagram.