Your All In London guide to Edgware 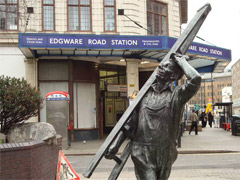 Edgware has a large Jewish and Asian community, which accounts for many of the area’s eateries and food shops. It is also home to the UK’s first ‘eruv’, an area within which Jewish people are permitted to take part in activities that are forbidden on the Sabbath. The eruv covers a radius of 11 miles and is marked by a series of poles – something which has caused a great deal of controversy among locals who feel it creates a private enclave. Edgware is vastly residential, however there is an indoor shopping mall called The Mall Broadwalk which has many high street stores, and one stop down on the Northern Line you will find Watling Market every Saturday, which sells fruit, veg and second hand goods.

Going out in Edgware