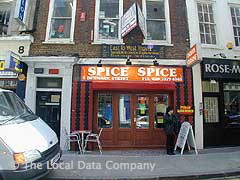 Ad
Closed
Our records show that Spice Spice is closed.

Spice Spice serves a variety of authentic Indian dishes at their restaurant and can cater for private parties of up to 40 guests upon request. A takeaway service is also provided.

Reviewed by Porcupine
Have visited Spice Spice on several occasions, and have found it quite a nice quaint little Indian. Staff seemed competent, and good quality food. Would consider going there again.

Reviewed by Minni
Without planning, I ended up tonight at Spice Spice Indian Restaurant in Soho. This was because of the cheap set dinner and a stylish Indian dressed lady who caught me in. So I thought I were served by the same lady. It was a pretty practicant who came to me, but told she was not allowed to take an order and promised to mediate my desires. HOwever, it was not until the owner came back in to the restaurant from his businesses I could make my order. He was not very communicative or expressive,actually little mechanic. The food was really good, as was the familiar Indian beer.But altogether, I had 3 different waiters in a tiny restaurant close to be empty.Could try again, the food is worth of