8
users have recommended this business 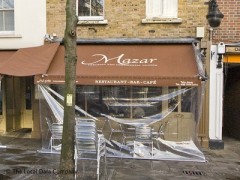 I love Mazar's food, like to eat it all the time, the people are really nice and you just learn the names and can call on then personally for assistance.
They deserve a chance I read the reviews and I think people are talking nonsence.
I have been coming to this restaurant for around 1 year. The food is great, the company is great, the music is always good and creates an atmosphere. I think some of the customers who right back reviews are just people who are envious of him. Don't take this nasty people's opinion go to his restaurant and see for yourself. People are nasty and too judgement

I love this restaurant, the foods excellent and the service you get is top quality.
They make you so welcome.
It is reasonably priced and the bill is always accurate and well worth the money.

I been going to Mazar for the last year and I have found it to be a very friendly and great place to go for a meal.
The food is great the restaurant is relaxing and has a great atmosphere, there is always a good selection of music and everyone is helpful.
I enjoy the different types of food offered and think there is a good selection.
Lots of deserts and the chef is excellent.
I feel this was the best decision going to this restaurant and would reccomend you try it for yourself to see that it is a very well worth a visit.

I always come to this restaurant as the food is good, the staff are welcoming and you get a good service. It feels cozy and always has a good selection of music playing. It became my favourite restaurant to go to and always feel like going to this restaurant, as it has a good feeling about it and it's a good environment to be in.
The best restaurant in the area. I love most of there food which I have been trying over several months and they have much to choose from, so you will never get bored.
Welcoming people and great staff.
Lucy

Nette, SW11
Added: Jun 2013
I've been to Mazar twice, the first about a year ago and I didn't enjoy it, but because I like Lebanese food I thought I'd give it another shot. That was a mistake. The food, although inexpensive, is not very nice and the service is not very friendly or helpful. I ordered a chicken shwarma but as it had run out, they gave me something else without informing me. Looking round at what everyone else on my table was eating, I didnt see much point in asking to swap it. When we decided not to pay the service charge, the waiter made a huge scene. In summary, food and service both need work.
Added on Thu 27 Jun 2013 at 14:45:02 [report] [respond]
User Rating: 10 / 10

Love it,Love it,Love it.I visit UK monthly from USA and ALWAYS make a point to have a meal here.One of London's best! FYI no need to EVER check the bill-its an amazing value--the food is always fantastic. Add to that the friendliness of the staff and the Owner who always stops by to chat. a 5 star!

The food is exceptional and fresh, my favourite for a healthy meal, great in the summer the sat outside in the square. Ask the owner for his suggestions when ordering

My advice: GO THROUGH YOUR BILL WITH A FINE-TOOTH COMB!

On the negative side: after a 2-course meal with drinks for 4 people, our bill arrived. It was not itemised, nor was the restaurant's name printed on the receipt. It was just a list of numbers; the total of which we felt was quite high.

One of our party went to see the Manager to go through each item on our bill to see what each price listed referred to, and it turned out he had added £24.00-worth of fictitious items to our bill AND had also included the service of £12.50, without it saying so on the bill. Had we paid the original bill, we would have put the tip on top and could have potentially been paying over £50 too much!

A one-off perhaps? Hardly, as the woman who was already speaking to the Manager when our friend went in to complain had had the exact same thing done to her bill, and she was not happy at being deliberately over-charged either.

So, in conclusion, yes, the food is very agreeable as is the waiting staff, but when your bill arrives go through it in detail to make sure they haven't conjured up any phantom items you neither ordered nor consumed.

Fabulous as usual. Excellent value for money and the food is fantastic. Number 1 Lebanese Food in London

Small servings, expensive, poor quality food, bad service, bad attitude and the arrogance to demand a 10% tip (a mandatory 10% tip is added to all bills after 6pm, it is written in the small print on the menu...). I will not waste my time or money, or worse still risk being thoroughly disapointed again.

hello...I have been several times to Mazar restaurent,the food is really good and tasty, the location is wonderfull in and outside, the service is nice and warm well except if there is a new stuff who doesnt know properly english so they might not understand you well,but its not a big deal...conclusion,u get bit mad if the food comes late but we should understand that its bussy and they cant do nothing...Any way thats my opinion,and hopefully i will go again;)
Added on Fri 21 May 2010 at 11:37:12 [report] [respond]
User Rating: 10 / 10

I have nothing nice to say about Mazar, firstly we were greeted by a non English speaking waitress who clearly had no idea about the contents of the menu. After much discussion with the manager, we chose a mix of cold be hot starters which when arrived was obviously different from what we had asked for. After our complete suprise to the substandard quality of dishes, we experienced further torture by being asked to pay for a dish that we didn't order or see. To top of our experience here, we was asked to tip.. I'm sure you can guess my response.
Added on Mon 22 Jun 2009 at 11:21:38 [report] [respond]
User Rating: 9 / 10