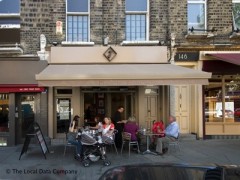 Add a PhotoSubmit a Top TipWrite a Review
User Rating: 9 / 10

I booked this restaurant for my girlfriends birthday last year in late 2012 and have been back a few times since. I think this is a great unpretentious little place that's very easy going. Was given a table swiftly and served a drink straight after. Food was great and the staff were friendly . There are tables outside with heaters for anyone who would like a smoke.
Added on Tue 04 Jun 2013 at 14:20:34 [report] [respond]
User Rating: 1 / 10

Having been a satisfied and loyal customer for many years, I booked a table for 4. Although not having been there for 6 months I wasn’t expecting any major changes to detract from the experience. Unfortunately this was not the case.

e) Upon arrival (on-time) and having booked a table well in advance, we were made to wait for a table despite a table for 4 sitting empty for over 10 minutes. Another table eventually cleared next to this table and we were able to sit down, still with that table empty.

f) When ordering the wine, I selected a familiar Barbera d'Alba from the premium list. When a bottle was brought to the table it was a completely different wine. I queried this and was assured twice it was ‘the same wine’ simply with an updated label. One of my guests knows that region well and pointed out to the waitress that this was completely untrue and that the imposter wine actually comes from over 800 kms away.

g) We ordered a side order of rosemary bread. It was presented void of any rosemary and a little stale. When pointing out the absence of rosemary, a waiter assured us the brown specs were rosemary and there was nothing wrong with the dish. However it neither smelt, tasted nor was rosemary! When a replacement was served, it arrived with rosemary and didn’t look anything like the original dish.

h) The tuna main course dish was not fresh, its smell camouflaged by the over use of crushed pepper. The offending tuna steak led to all the symptoms you’d expect 5 hours after leaving the restaurant.

This is a disappointing reflection of a venue we used to frequent. For a meal that cost well over £100 it also left our first time guests highly unimpressed with their visit.

me and my girlfriend went on one of our first dates here about six months ago and had a lovely meal. so for valentines day (a week later to avoid the schmultz) we decided to go back, i was a bit dubious because of some of the reviews i had read but we still went and had a lovely meal in a great atmosphere.

yes the service is slow but i found the waiters were always pleasant and in our case interacted with us throughout the meal and at the end even gave us a free amaretto (which although i didnt want was a nice gesture). it took an hour to order the food but in this time we had been given our wine and olives and did not feel it had taken an hour. i understand if you are in a rush it would be annoying but whenever you wanted to speak to a waiter they were there to help.

the food is good, i had the tricolore salad and my girlfriend had goats cheese with balsamic to start and they were both tasty and fresh and not mucked about with. how you would want the italian classics.

for the main i had the seafood risotto which had a good amount of and variety of seafood in it but lacked a little bit of flavour, but i still ate the lot! my girlfriend had the seafood linguine which she finished and wanted to lick the plate. she has this wherever we go and still thinks its the best she has had in London.

in total it came to just over £55 with a lovely bottle of red which was very reasonably priced.

it may have taken 2 and a bit hours to finish and the service is a little frenetic at times but i think that adds to the experience. i would go back again as the waiters are friendly and courteous at all times.

if people of primrose hill want to avoid J then fair enough, it makes it easier for me and my girlfriend to enjoy a classic Italian meal in a traditional Italian style - slow service, great atmosphere and simple, tasty food. anyone who has eaten in Italy will know this is exactly what Italian restaurants are like! so enjoy it...without the expensive flight to Mil

Went here in Sept 2009. Selected it at random while walking around Primrose Hill. Unlike some of the reviewers, I thought it was excellent. Service was OK and the food was very good. The gnocchi was superb. Price was less than £80 for two adults (we both had wine/beer) and two children (16 & 12). I'd go back if I was in the area again.

The service is absolutely awful. The waiters are unwelcoming and dull and not at all interested in helping things along, and the food takes ages to come to the table. However, the food, once it arrives is nice enough.
Added on Wed 14 Oct 2009 at 11:54:02 [report] [respond]
User Rating: 7 / 10

I don't know about all of these negative reviews. I eat quite frequently at J's and more so since I moved into the area. I think the food is excellent, and cheap enough that one can eat there for a lunch of dinner whenever. Pizza is particularly good (have the Parma ham with rocket) as is the salad with fish cakes.
Added on Sun 11 Oct 2009 at 19:53:50 [report] [respond]
User Rating: 1 / 10

Price is quite expensive for what is is. Just regular pizza, nothing special. I asked for a 330 ml limonade and they gave not even half of it. No smile, service is really not that great, typically italian, to be honest. And the icing on the cake, they let you know very clearly that service is not included...
Added on Mon 31 Aug 2009 at 20:06:00 [report] [respond]
User Rating: 8 / 10

Food:
- Pricing is fair enough
SERVICE:
- Even if you speak english, they will speak in italian for you, if you dont understand then that's just too bad so sad for you. you are the ignorant and uneducated.
- If they make errors and not take your order, then Im sorry you'd have to wait. No discounts or service, nor even a little apology but just some random comments like " ciao bella' at the end to make up for you waiting 40 minutes for a no-special pizza that you could probably find in every italian place.
- I went to eat with people not to watch people eat, and my friends were certainly not there to watch me eat after they had finished 15 minutes before.
- last two words: DON