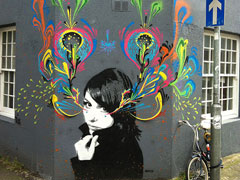 Graffiti Sessions is a three day event that welcomes the most diverse audiences to question issues and next steps about value, creativity and control in relation to street art and graffiti. At a time when Britain can no longer easily afford to clean all the marks on the walls and furniture of its public space, this landmark conference will question graffiti futures, and look at visions of graffiti as both urban regeneration as well as urban decay.

This inexpensive but proudly international event - based in London - brings together three of the most influential centres of arts and learning in the world; Central Saint Martins, Southbank Centre and University College London. Organised by Marcus Willcocks and Prof. Lorraine Gamman from the Socially Responsive Design and Innovation Hub at Central Saint Martins, UAL, Sabina Andron and Dr. Ben Campkin from UCL’s Urban Laboratory and Lee Bofkin from Global Street Art, it will aim to feature the sort of discussion that may change the way we see the built environment as well as the world.

3rd December, Purcell Rooms, Southbank Centre
Talks by some of UK’s most prolific and sought after street artists such as Ben Eine, Noir, Inkie and Dotmaster together with author and cultural criminologist Alison Young and Adam Cooper from the London Mayor’s office, alongside Britain top graffiti cop and witness for the prosecution – BTP’s Detective Inspector Colin Saysell – as well other high profile urban managers and creatives The discussion will address questions such as:

Can street art and graffiti practices support claims that they can re-sociialise, regenerate and or/ revitalize cities and neighborhoods?
How ‘cops, courts and cleaning’ of graffiti can be more economically and socially sustainable for the publics they serve?”
What policy and practice can learn from graffiti and street art.


Get your tickets now and see you there!