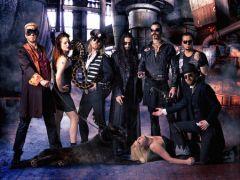 Therion was formed in Upplands Vasby (a suburb to Stockholm, Sweden) in 1987 by Christofer Johnsson, under the name 'Blitzkrieg'. Chris was at that time playing the bass and did the vocals. The line-up consisted besides him of Peter Hansson on guitar and Oskar Forss on drums.

Blitzkrieg had influences such as old records by Slayer and Metallica, but sounded maybe more in the direction of Venom and Motorhead. Not many know, as they never recorded any demos and only did 2 concerts before they decided to break up in early 1988. Chris however never gave up the idea and during a few months he switched to guitar, started to be influenced by bands like Celtic Frost and reformed the band with Peter under the name Megatherion. After a while also Oskar returned to the band and there they were, same band again, but with a new name and a new death metal oriented sound. After some time they found the bass-player who one you can hear on their recordings; Erik Gustafsson, who was just leaving another young Stockholm area death metal band; Dismember. Shortly after the name was changed to Therion.

With this line-up the band recorded 2 demos (the first one had the later Dismember singer Matti Karki on vocals in a short attempt where Chris wanted to focus on the guitar), one mini-LP and one full length LP/CD, that would make the band known as one of the most promising upcoming death metal underground bands.