The Club At Vaults Festival 2017 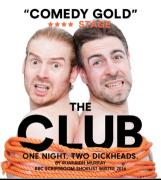 Phoenix Nights meets The Sopranos. One night in London’s legendary 90s club The Tardis. If you were there you wouldn't remember anyway…George is facing closure unless he pays the mother of all rent demands. Fortunately, The Tardis is having THE party of the year tonight. Only problem is, George is also due money to feared gangster Dave Sharky, who’ll stop at nothing to crash the party and take the club for himself.

Mark Farrelly: Theatre credits since graduating from Cambridge University include Nick in Albee’s Who’s Afraid of Virginia Woolf? (Trafalgar Studios, West End, opposite Matthew Kelly), Ayckbourn’s Drowning On Dry Land (Jermyn Street Theatre, opposite Les Dennis), Macbeth at the Greenwich Theatre / Germany’s Globe Theatre, and over 120 performances, across the UK, of the solo plays The Silence of Snow: The Life of Patrick Hamilton and Quentin Crisp: Naked Hope, both of which he also wrote. He has just performed both solo plays at the Arts Theatre in the West End, and is writer and co-star of Howerd’s End, the forthcoming play marking the centenary of comedy legend Frankie Howerd.