In front of Buckingham Palace 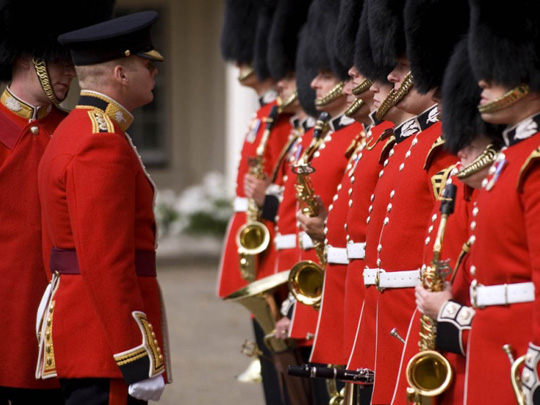 The Changing the Guard ceremony at Buckingham Palace follows a traditional format that is the basis for guard changing ceremonies which take place at other Palaces and Royal Residences.

The Old Guard (the soldiers currently on duty) form up in front of the palace and are relieved by the New Guard which arrives from Wellington Barracks. The New Guard is accompanied by a Band or Corps of Drums. The ceremony represents a formal handover of responsibilities.

The Guard at Buckingham Palace is typically provided by one of the five Foot Guards Regiments of the Household Division, identified by the number of buttons on their distinctive tunics and the plume in their bearskin caps.

You will notice that soldiers of both the Old Guard and New Guard carry regimental flags. Known as Colours, these traditionally served as regimental emblems which provided rallying points in battle. Today, they carry regimental distinctions or battle honours emblazoned on them.

Changing of The Queen’s Guard takes place in front of Buckingham Palace at 10:45am and lasts for about 45 minutes. You should arrive early to get the best view. Soldiers gather at St James’s Palace and Wellington Barracks from 10:00am and march to Buckingham Palace accompanied by music.

Before the Ceremony
10:43 - Old Guard leaves St James’s Palace (a contingent remains until it is replace by a part of the New Guard)
10:57 - New Guard leaves Wellington Barracks towards Buckingham Palace where the ceremony starts at 11:00