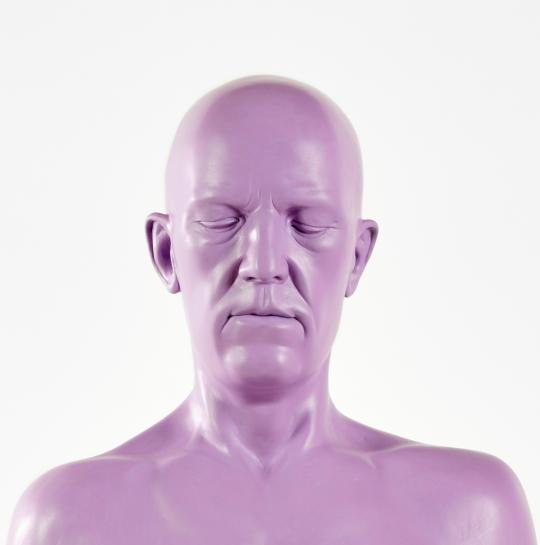 All of these statements are true about Guy Reid and yet they do not make up a whole picture of him. They are only possible ways to see him as a human being and it is in the multiplicity of his personas that we must look at his work. We can also see exactly what he looks like as he carves himself into many different figures. Some he leaves in the raw wood, others are painted green and in the MOCA exhibition we see him in a light purple, a lavender perhaps. Lavender is a colour that recalls France, where he lives and works, but also a long held prejudice that homosexuals have a ‘lavender network’.

Reid is unsparing in his portraits of his lover Andrew as well as celebrities (Alan Carr, Philip Pullman, Dame Jacqueline Wilson) and other commissioned work. But the mirror is where he can be the most brutal. In Man Walking (2016) we see his body, in good shape for a man in his 50’s, we see his feet, his penis, his breast and his shaven head and we take it on trust that they are the true reflection. His technical skills are not in doubt, he is a virtuoso carver, but as an artist he pushes us to see past the haptic. Who is this little purple man (one metre high)? Why is he naked in the space? What is he gazing at on the ground in front of him? Where is he going, walking to?

Reid’s work is uncanny as well as disturbing. Uncanny, because its likeness to him is overwhelming even at a reduced scale. It is mysterious and the colour makes it other-worldly. It is eerie and the figure looks alive as if it might decide at any moment to step forward or walk out the door. It has an alien, supernatural quality to it and the sheen off its skin is so inviting to the touch that a hand shake is almost inevitable. This purple is also the colour of Shiva’s skin in Hinduism.

Reid works with many notions of the supernatural. In 2016 he was invited to show at the Chapel Royal at the Tower of London and sent a life-sized figure of himself, arms stretched out in a crucified form called Christ Figure (2006). Was he presenting himself as Christ, artists as figures of suffering, or simply depicting Jesus sans cross? The face of Christ in historic religious work was almost always that of a real sitter, so why not the artist’s.

In Homo Erectus (2016) Reid looks to ancient British belief systems, which came to be carved onto many Christian churches over the centuries. He shows himself again a god, this time as the Green Man with an erection, similar to fertility symbols associated with the Celts, Druids, and Wicca. It is a symbol of rebirth, not far removed from Christian iconography. Reid made this figure by merging himself, a local farmer, and an ‘invented archetype’. It also references the Cerne Abbas Giant, a huge fertility figure carved into a chalk hill in Dorset, also with a large erection (and wielding a club).

Reid asks us to question belief systems that go right back to the beginning of human consciousness, including a belief in art and in making. His skills as a craftsman and an artist open the work for each viewer to cast their own meaning to these vulnerable, naked men, who might stand in for each and every one of us, regardless of sex, gender or orientation.