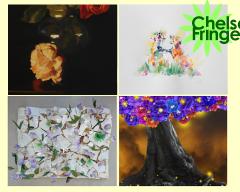 Oxford House and The Chelsea Fringe Festival will be hosting a show featuring works by four artists to celebrate the diversity of nature. The exhibition 'Ode to Nature' will feature different formats: from painting, to collage, to mosaics. Each artist plays on a combination of shapes, colours, strength and fragility using their own relationship to nature. This will create an interesting study of contrasts. Each work also reveals the necessity of conveying a message to the contemporary viewer – whether it is a pure emotion or a thought.

Come and celebrate with us the 6th annual Chelsea Fringe Festival! This volunteer-run event is powered by the people, for the people. It is an alternative garden festival full of artistic events, family friendly activities and walks, talks and debates about everything gardening. This is sure to entertain everyone in the family and maybe inspire you to do a little gardening yourself!

As part of Oxford House's programme for the festival, we have organised a fantastic concert for the third time. If you love folk music and gardening, you can't miss 'Folk&Flowers' on the 2nd of June!

Ode to Nature - The artists

After living in many countries and studying a large variety of subjects, when Francesca Busca reached 40, she settled between London and Trieste and found her outlet in what she liked and did best, namely using her hands to create. Art exhibitions, painting and modelling clay were regular hobbies which never satiated her inherent creative nature. She started to learn more about mosaics and got several qualifications in London, Italy, Turkey to quote only some of them. Whilst developing her own style, Francesca's aim is to constantly push herself beyond her creative boundaries: experimenting with different subjects, colours, materials, textures, depth, tools or methods...

Of French Lebanese descent, Lola Awada is a writer and illustrator living in London, with a background in ghost writing, translation, graphic design and photography. She has also worked as a volunteer for UNICEF and Amnesty International, and she currently runs a CrossFit gym. Born a child of war-torn Lebanon, Lola, now 44, grew up living between Lebanon, France and Italy, before moving to London when she was 18. Lola cites music, writing and drawing as helping her cope with the war during her childhood. She also cites children as a major inspiration.

Gillian O’Shea is a professionally trained Irish artist specialising in contemporary Watercolour. Gill studied Fine Art in Dublin Institute of Technology and graduated with a first class honours degree in 2005. Since graduating, Gill pursued an alternative career in Financial Services, qualifying as an accountant in 2009. Gill currently lives and works in Dublin. In 2014, she started painting in Watercolour, and in July 2015 created ‘Dabble in Art’ to share her work and passion for Watercolour with others. In late 2016, Gill decided to return to art full-time and develop her artistic practice. She currently lives and works in Dublin.

Chris Polunin is a classically trained artist from Newcastle upon Tyne, working in Edinburgh. He began his education in realist painting at Angel Academy of Art, Florence and continued at The Academy of Realist Art, Edinburgh where he now teaches. For him, the creation of beauty should be the primary aim of any artist. Of course, this idea dates back to the ancient Greeks and has been echoed in many periods since. While his art is not solely about beauty, first and foremost, he hopes his work embodies this ideal.