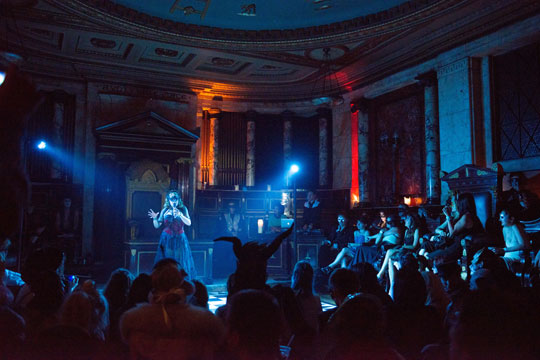 On the site of the old Bedlam hospital, where crowds once gathered to mock the crazies, rose a Masonic tabernacle, home to clandestine gatherings and arcane rituals. Fallen into disuse, walled up and derelict, the Grecian Masonic Temple at Liverpool Street lay bereft and forgotten for decades.

This summer A Curious Invitation and the East End Film Festival will return to the marbled splendour of the City’s only original Freemasons’ lodge for a macabre night of cabaret, circus and cinema.

Freemasonry is one of the world's oldest and most beguiling secret societies. Its rituals and allegorical imagery date back to Egyptian mysticism and the Biblical construction of the Temple of Solomon. With its abstruse initiation ceremonies, secret handshakes and oaths of allegiance it has attracted such famous figures as Mozart, George Washington and Harry Houdini. Its offshoots have included occult organisations like The Hermetic Order of the Golden Dawn, which included Aleister Crowley among its members.

The Grecian Masonic Temple on Liverpool Street was built in 1912 by Charles Barry Jr, the son of the architect who designed the Houses of Parliament.

The night will begin with a special screening of

TWIN PEAKS : FIRE WALK WITH ME

David Lynch’s paranormal and paradoxical prequel to Twin Peaks, detailing the seven days leading up to the murder of Laura Palmer in a nineties Northwest lumber town.

In this opulent chamber of marble and gilt adorned with brazen lanterns and a pair of stately mahogany thrones our compere beyond compare, BENJAMIN LOUCHE, the disreputable and aberrant Lynchean linchpin of the evening will present:

ART MACABRE invite you to sketch a tableau from The Rake’s Progress by William Hogath, himself a masonic Grand Steward, which charts the vices and vicissitudes of Tom Rakewell, culminating with his consignment to the infamous Bethlehem Hospital, aka Bedlam, which stood on the site of tonight’s venue.

TIM MAYNARD will display for your delectation his magnificent menagerie of creepy crawlies, critters and assorted wee beasties, including snakes, scorpions, lizards and spiders.

Our GOLDEN SERVERS will pass among you hand-feeding you toothsome titbits and mouthwatering morsels of strawberry pavlova, spiced carr