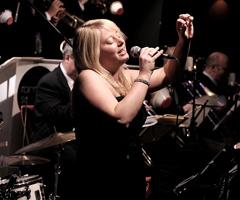 After acquiring what she likes to describe as “a strange and somewhat unfashionable obsession with jazz and Big Band music at an early age” Georgina began her musical career as a professional trumpet player, working for a number of years with many famous faces and big bands in concert halls, television and radio. However, again as she describes it, “harbouring a desire to wear a posh frock” she decided that adding singing to her repertoire could be, well, fun. So she set up her own band to sing with and the rest, as they say, is history. These days her excellent swing jazz vocals can be heard in a variety of impressive settings, not least as featured vocalist with the BBC Big Band (with whom she appears and records regularly), the BBC Concert Orchestra and as resident singer with Ronnie Scott’s Jazz Orchestra. Her first CD was Jazz FM’s “CD of the Week” and the single “Change Partners” from her second CD, “Watch What Happens”, released in June 2012, shot to number 1 in the iTunes Jazz Chart with the album itself making it into the top 5. The London Evening Standard also awarded the album “CD of the Week” status. Her latest recording, “Peggy, Duke & Benny” continues her love affair with classic big band jazz and swing. For this 606 gig, Georgina will be performing songs by Peggy Lee, Ella & Anita O’Day, and will be backed by her fantastic band, including Gabriel Latchin on piano and Joe Pettitt-bass. This is wonderful, swinging straight-ahead jazz from one of the most talented singers on the scene. Oh, and she still plays great trumpet as well so expect something just a little different.

“A talented trumpet player and singer with a sassy, vibrant style” All About Jazz; “…a characterful force to be reckoned with” Jazzwise