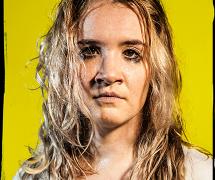 Every woman may be called ‘witch’ by a man,
For every man will find unjust reason.’

1591.
Edinburgh is gripped by the witch-craze.
Agnes Sampson, falsely accused, awaits her execution.
And the Devil waits in the shadows.

Winner of Festival Spirit Award 2017 at VAULT Festival, The Witch’s Mark is brought to life by Over The Limit and forms part of their Celtic Season currently touring the UK.