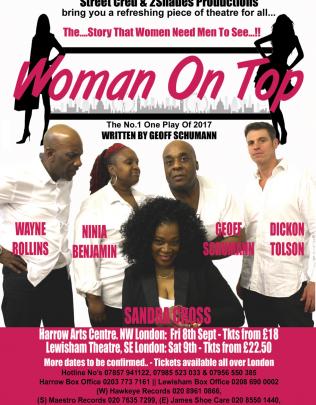 *****WOMAN ON TOP (W.O.T)*****
The No.1 Play for 2017, co starring and written by Geoff Schumann
A piece of refreshing theatre for all..
"Mekada (played by Sandra Cross)
Knows what she wants and needs..but what does she decide?"

SYNOPSIS:-
Makeda is approaching her 40th birthday and has her life on point.
Great career, exciting social life and energetic hobbies, She has her dream car, Owns a beautiful home with her fiancé Terry as well as other properties in London. Travels on exotic holidays at least twice a year,
She has no children due to the fertility issues of her partner and has never voiced concerns that she is childless. She has been with (Terry) for 18 years.
They have been engaged for several years. Terry sees marriage as a piece of paper.
He is a successful executive of a sports company.
Now they are going to separate but what’s the reasons behind this. Other friends come into play offering all sorts of opinions on what is perceived as a successful union.

There’s Terry’s two friends Pablo a sexist brute and Kirk a white male who has grown up around black people and even speaks with that urban twang. Makeda has a best friend who has strong opinions about relationships and also a loving mother who interferes in her life constantly...her mother wants Makeda to give her a grandchild. Makeda decides shat loves Terry but is no longer in love with him anymore....Did I mention that she has a work colleague that she admires but all of a sudden the two of them are starting to develop feelings for each other....What’s a girl to do....
Throw away a stable but unhappy present?
Seek pastures new?
Journey into a uncertain future?
How easy will it be at 40 to go out there on your own....
Don’t women dream of men like Terry to offer them loving security? All this and more will be answered in the hit play.
‘Woman On Top’...

You the audience are very much a part of the play.
The characters also ask you the audience for your opinions as well...Let’s all get on board for this roller coaster of a play.
Join us this Autumn

This is the play all women want men to see..!
coming to London & UK in September 2017
A play for all the family..