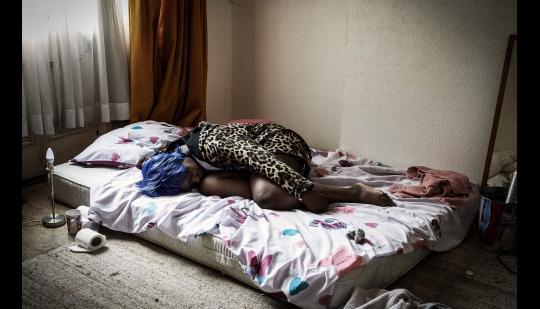 A touring photographic exhibition which aims to portray the signs of slavery and exploitation launches in London on Friday 5th January, ahead of touring the country.

“Invisible People” is part of the National Crime Agency’s campaign to raise awareness of modern slavery and human trafficking.

The NCA has teamed up with photographers including Juliette Carton, Haitham Naser and multiple award winner Rory Carnegie to recreate the lives of Invisible People and bring them into view as part of this exhibition. It has worked closely with human rights charity the Helen Bamber Foundation to provide real insight into the truth behind modern slavery.

The striking and intimate images encourage the public to truly see what they may have been looking at for years. The exhibition comprises a series of large, freestanding cubes displaying the images, each with written commentary describing what the viewer is seeing, information about that particular industry and signs which may indicate someone is a victim. Each image captures a snapshot of life within the seven industries of modern slavery – child trafficking for sexual exploitation, forced prostitution, agriculture, construction, maritime, cannabis farming and food processing.