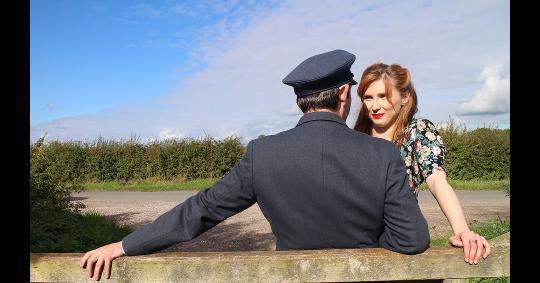 Fresh from a rural UK tour, Anonymous is a Woman Theatre Company brings Think Of England to VAULT Festival 2018. This immersive production will recreate 1940s London and the air raid shelter that was originally situated under Waterloo Station, transporting the audience back to wartime dangers and exhilaration of tea dances.

The war office has employed Bette and Vera to travel the country hosting tea dances to boost morale. However, the women’s real purpose is to send the young men off to fight having experienced all of life’s pleasures.

Based on a real-life war time scandal that threatened to destroy these women’s lives, audiences will join in with the unforgettable dance and rousing song while witnessing the story unfolding around them. When the RAF boys discover the real reason for the dance, will the news tear the already splintered RAF crew apart?

Continually adapting to fit its venue, the play will take on a new significance at the Vaults shifting to London during the Blitz era. Think Of England is an invitation to dance the night away.