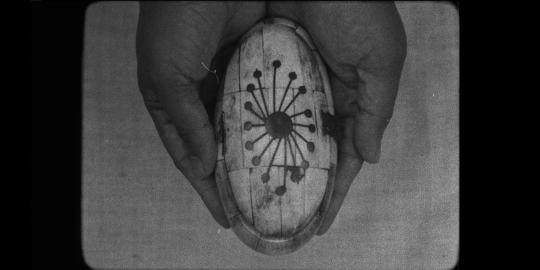 BREADROCK is a new film and sculptural installation for PEER, by artist collective Fourthland (Louise Sayarer and Eva Knutsdotter) and artist and filmmaker Rosalind Fowler. Reflecting on a ten-year collaboration with the diverse communities of Wenlock Barn Estate in Hackney, East London, the work is a visceral homage to cultural history, memory and universal myth. Melding experimental and ethnographic filmmaking, the work presents a series of staged vignettes drawing on the rituals and artefacts of the Estate’s Bangladeshi, European, Kurdish, Serbian, Turkish, Ugandan and West Indian communities, to create new kinships and myths.

Shot on 16mm film against the artists’ makeshift stage sets of textiles, paintings, and objects in a public garden on the Estate, BREADROCK manifests the inner worlds of Wenlock’s inhabitants: a Bangladeshi woman wearing her wedding dress buries a symbolic ‘umbilical cord’ in front of forty guests to mark her son’s birth; a West Indian man channels his deceased grandmother through an old-fashioned telephone and a cosmic donkey; another man surrounded by sheet music conducts an invisible orchestra and symbolic ancient rock, inspired by his love of geology; and others slowly process and gesture, holding bowls and plates aloft. The soundtrack is a composition of raw sounds improvised from domestic household objects found in a resident’s flat.

Close to the large-scale projection of the film in PEER’s street-facing space, pieces made by the artists - inspired by their exchanges with the Wenlock community - and objects belonging to residents, form an assemblage of quasi-mystical sculptures.

Fourthland have been working with the residents of Wenlock Barn since 2008, on projects connecting the land and people of the Estate, including micro-allotments, foraging spaces, a salad-growing scheme, an orchard, a wheatfield and a series of public gardens, each with its own distinct cultural identity. By introducing traditional crafts such as wool spinning, breadmaking, carpentry, bricklaying, music making and herbalism, Fourthland have revealed the hidden sources of knowledge and skills owned by the Estate’s diverse community of residents. BREADROCK is their first collaboration with filmmaker Rosalind Fowler, known for her explorations of the politics and poetics of place and belonging in the contemporary English landscape.

PEER has worked on several projects with Fourthland throughout the ten-year collaboration with nearby Wenlock Barn Estate, including Everything Happens on The Street, Handling, Repairs and Alternations Studio (2015), a series of 'street acts' and 'street scenes' involving passing members of the public. The project, which took place during PEER’s re-landscaping of the public area at the front of the gallery in 2015, resulted in a new garden and seating area, situating the street as a place where home, work and public sharing dissolve into one another.