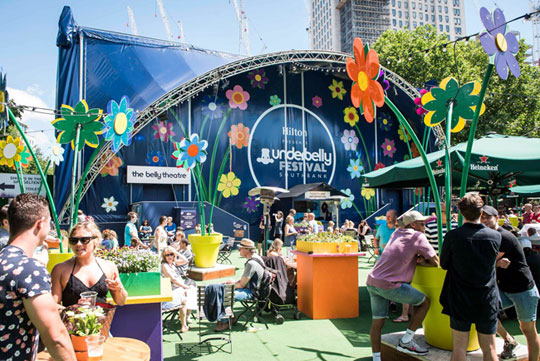 Underbelly Festival is back for its eleventh year on the Southbank with an incredible line-up, including headline shows from four countries across four different continents by some of the finest purveyors of circus in the world.

Open from April until the end of September, Underbelly Festival Southbank brings the best in live circus, comedy, cabaret and family entertainment to the heart of London. We've got an amazing line-up of shows in an amazing city-centre, pop-up festival world. You can enjoy international street food, after work drinks in one of London's largest outdoor bars and a true festival atmosphere on the banks of the Thames.

Our shows are short (usually only an hour long), sharp and very sweet. And the vast majority of tickets are under £20 making Underbelly Festival your affordable entertainment destination in London this summer.

A Simple Space
Seven acrobats push their physical limits without reserve; this performance is simultaneously raw, frantic and delicate. Supported by driving live percussion and presented so intimately that you can feel the heat, hear every breath, and be immersed in every moment.

The TuckShop Live!
The BEST of the UK’s Drag is here, in one place, for one night only in Tuckshop Live! Featuring Herr, Meth, Ophelia Love, Cara Melle, Cheryl Hole, Poppy Cock, Taylor Trash, Tayce, and more to be announced, this fierce line up of incredible performers will give you a drag show like no other. Be ready for legs, laughs, and lip-syncs like no other at The Tuckshop Live!

Sons of Pitches
The Sons of Pitches are a multi-award winning British vocal group combining soaring solos, impeccable harmonies and sensational beatboxing to stunning effect. In 2015, they became the first winners of BBC2’s The Naked Choir hosted by Gareth Malone. With over two million YouTube hits and a growing international reputation, The Sons, have “given a cappella a kick up the backside”.

Mark Watson - How You Can Almost Win
Last year Mark Watson - a man prone to considerable anxiety, with multiple phobias and a history of piss-poor self-esteem - was asked to go on Celebrity Island with Bear Grylls. It really wasn't for him at all because his favourite things include safety, comfort, food and not being scared and miserable. But the experience changed the shambolic comedian for the better, and now he's written a sort of motivational talk about what it taught him. But still with jokes.