'Pentonville' - An exhibition of paintings and drawings by Alex Manolatos 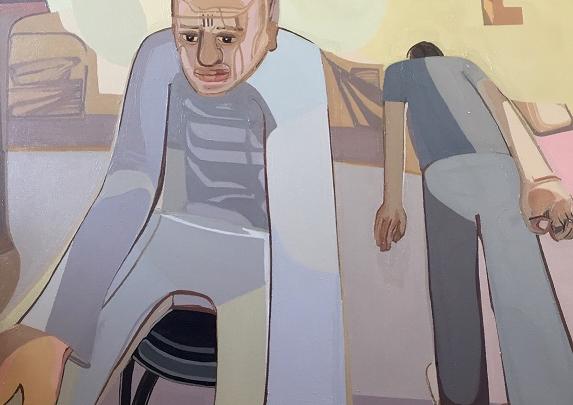 Free. The Private View for 'Pentonville' is on the Tuesday 17th July. Thereafter by appointment only for non-members, please contact Alex Manolatos on: 07856 988941.

Artist Alex Manolatos has recently been involved in running a reading group at Pentonville Prison in north London. He meets the prisoners once a month for an opportunity to air views in a congenial atmosphere. Manolatos tries, by painting these meetings from memory, to express the interactions between the inmates within the ever-present hulk of the building.

With previous experience in architecture (model commission for Richard Rogers in 1980, development of the Royal Albert Docks in 1982), Manolatos received a First Class Honours at the City and Guilds School of Art in 1986 and has since exhibited in group exhibitions at Bartley Grey Gallery, Lacey Contemporary, as well as two one-man shows at the Broadbent Gallery in Notting Hill and Chart Gallery in Church Street, Chelsea. He is also a talented graphic designer, and in the ‘90s ran his own practice with emphasis on book design and illustration, clients included The Guardian and Cadogan Books.

The ‘Pentonville’ paintings and drawings, executed over the past 2 years, depict monumental figures and faces of inmates conveying defiance and vulnerability at once. Manolatos says ‘People and architecture are my main interests. In certain situations, the way people and their environment affect each other is fascinating to see, especially at an emotional level.’ Some books enjoyed by the group include ‘East of Eden’ by John Steinbeck, ’The Circle’ by Dave Eggars, ‘Oliver Twist’ by Charles Dickens and ‘The Curious Incident of the Dog in the Night-time’ by Mark Haddon.

Manolatos depicts the prisoners firmly rooted in the space where they meet. The infinite possible combinations and compositions may suggest a form of freedom while highlighting the limits imposed on the prisoners. In many ways, painting offers a straight-forward metaphor for prison life: on the canvas there is always a tension between illusion and reality; in prison a similar tension occurs between the prisoners’ emotional life and their physical existence.

The setting of a prison library: the crude lighting and easy-clean surfaces, the prisoners’ drab indoor-wear (mostly grey tracksuit tops and bottoms) all accentuate the starkness of their existence. The paintings use this starkness to draw parallels between, for example, a prisoner’s posture and the furniture around him or, maybe, his metaphorically expressing the room’s perimeter from which, for the moment, there is no escape.