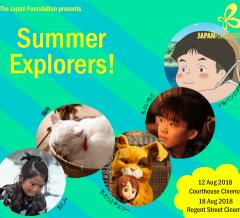 Free, but booking is essential

Our popular Summer Explorers free film season returns!
From puppetoon animation to Samurai comedy, and a film version of Japan’s mega hit TV drama, we have something to suit all ages and tastes.

Chieri and Cherry (Dir. Makoto Nakamura, 2015, 54min)
14:30
The only friend Chieri has is a stuffed animal Cherry; it talks and plays with Chieri, and helps her go through life in place of her late father. When she visits her grandmother’s house for her father’s memorial, they find a stray dog giving birth to puppies, but a mean crow and strange monster come to steal them. Can Chieri and Cherry keep them safe?

Cat Samurai (Dir. Takeshi Watanabe and Yoshitaka Yamaguchi, 2014, 100min)
15:50
Masterless samurai Kyutaro Madarame (Kazuki Kitamura) is hired by a dog-loving gang to get rid of a rival gang’s cat, being under the impression the cat has possessed the gang leader. The only problem – when Madarame comes face to face with the cat in question, he can’t go through with it… and is now the target of both gangs! Hilarious comedy for both cat lovers and non-cat lovers alike.

Oshin (Dir. Shin Togashi, 2013, 109min)
17:50
In 1907, 7-year-old Oshin is traded for 60kg of rice and sent to work in a lumber shop. Suspected of theft by the owners, she runs away into the mountains during a blizzard. Found by the kind Shunsaku, Oshin learns how to read and write, and the importance of independent thinking. A remake of the biggest hit drama in Japanese TV history, Oshin retells the story of a woman whose patience and endurance helped her through a tough life.