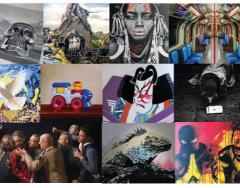 This month long show is a collective of artists established by London mixed media artist Gerry Laffy. Some of them are professional, some semi pro, some students and some have a learning difficulty. The collective will not identify which is which. A second show GLC show is also booked at the same venue in the summer.

Gerry Laffy’s career has seen him play guitar with Girl, Ultravox, The London Cowboys and John Taylor and has guested with many famous acts including Duran Duran, Stray Cats and LA Guns. He was a graphic artist at London Weekend Television, for 15 years he was manager to film director Russell Mulcahy of Highlander fame and he also ran a record label. For the past 9 years he has taught at a North London college with students with special educational needs. He has morphed all these careers to create an artistic family to showcase the work of these artists some of whom have never exhibited before and has recruited a very special guest along the way.

From January 9th – February 4th 2019 Gerry has arranged for several artist to exhibit in the upper gallery at Lauderdale House in Highgate. This collective will include several oil painters including Jonathan Dickson from Dublin, Woz from the North East of England, Tessa Gaynn from France, Phil Parkinson (Stealer) from the Midlands and Londoners Dean Martin and Ronan O’Regan. Also Montell Rainbow and Gerry Laffy (mixed media) both from London and two photographers Conor Carroll from London and Tosh Marshall from Dover.

Special guest in this collective will be Uber artist Mason Storm. The private view 9th January 7.30 - 9.30 will feature music guest star Jade Danielle Williams a proud Welsh lass. So there will be a wonderful array of talent from across the UK and Europe.