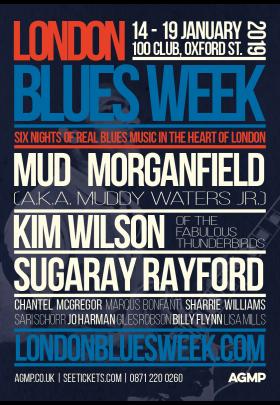 The 100 Club is the home of the annual London Blues Week, which in the past has seen acts such as Joe Louis Walker, Bernie Marsden, Popa Chubby and Eric Sardinas.

Now in its third year, London Blues Week 2019 will provide another six nights of pure blues in the heart of London, including a fantastic performance from Sharrie Williams on Friday 18th January.

Three time Blues Music Award nominee and 2012 Blues Album of the Year award winner from L'Academie du Jazz, Sharrie Williams was born and raised in the Daniel Heights projects of Saginaw, Michigan. Sharrie began singing in the church choir at the age of six, and by the time she was 12 she had begun touring and recording with the Greater Williams Temple church choir. Under the choir directorship of Hubert J. Williams, Sharrie performed and recorded with Shirley Caesar, The Winans, Dr. Mattie Moss Clark, and the Reverend James Cleveland.

During high school, Sharrie toured Jamaica with the Saginaw High Jazz Band where her exceptional talent was plain for all to see. Sharrie knew that music was her lifeline, and she began earnest and extensive vocal training in jazz, gospel, and drama. In 1993 she toured with Snap Productions in a presentation of Michael Matthews’ gospel stage production, I Need A Man.

In 1996, she began singing with the house band at a club in Saginaw named Wise Guys. This gig was to change Sharrie’s life forever, as that house band quickly evolved into Sharrie Williams & The Wiseguys, and she met and fell in love with the owner of Wise Guys. Sharrie and Norman “Pops” Crawford were married in 1998 and celebrated 16th years of marriage in 2014.

In April of 2004, Sharrie released Hard Drivin’ Woman on the German label, Crosscut Records. The album received international acclamation, and word began spreading in the U.S. about her captivating performances and the rock-solid Crosscut recording.

Sharrie followed up with Live at Bay-Car Blues Festival (2007), recorded live at the festival in Grande Synthe, France on the Crosscut label. Studio albums I'm Here to Stay (2007), and Out of the Dark (2011), were released on the Canadian Electro-Fi Records label. Out of the Dark went on to win the 2012 Blues Album of the Year Award from the prestigious L'Academie du Jazz in Paris.

Sharrie Williams & The Wiseguys continue to tour and have expanded their mission to include Poland, Austria, The United Emirates, Demark, Finland, Qatar, Bulgaria, Romania, Serbia, Georgia, Ireland, Norway, Hungary, Tunisia, and 20 other countries. Sharrie’s desire is to take her Rockin’ Gospel Blues to every country and every nation, and as certain as the rain ending in time for her performance, there’s no stopping this princess!