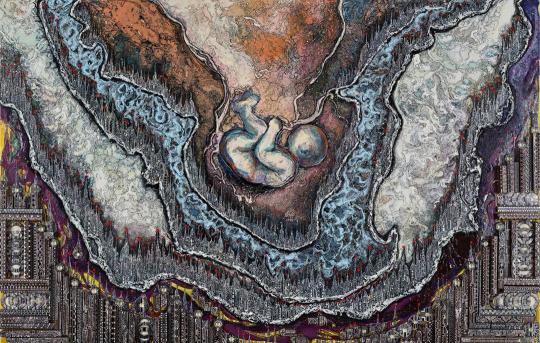 CAMA Gallery have announced a London solo exhibition of Iranian contemporary artist BitaVakili, considered one of the most successful female artists in the Middle East.This marksVakili’s first solo exhibition in the UK.The exhibition will open with a private view on 15th of November and run until 17th of December 2018.

Bita Vakili celebrates a successful international career, including a number of works sold at auction, such as the 12th Christie’s Dubai auction in 2012 where a piece sold for more than double the estimated US$20,000.This acclaim has made her one of the most successful and highest selling female artists in the Middle East.
Vakili uses mixed-media on canvas (oil paints, acrylics, fabric, pencil, markers, plasticine, dough, tissue paper, staples, and a variety of adhesives) to create a three-dimensional visual experience.Vakili explores natural changes, both external and internal that happen within a lifetime, as well as the abstraction of scent, space and corporal elements.Vakili considers her work as inherently Iranian, drawing on elements of Persian miniature painting.

For this particular exhibitionVakili uses the figure of human foetuses within abstract forms,as a symbol of pure life, naked and unpolluted. Encompassed by Bita’s work, evoking the security of a mother’s arms, the growing life forms explore the continuity of life and death.

Twisting forms on canvases, allude to the embryonic spiral movements. Pure, limpid and grey and sometimes pink and red colours suggest the embryonic phase.The effort of the universe for survival, resistance, birth and creation is reflected in each veins and pulses of the painterly embryos.

Vakili says: ‘My motivation for creating this body of work is to visualize the skill and patience of feminine creativity as a seed of hope, as a moment of promise for a brighter future. In a way, it is a response to the growing need for positivity in the face of difficult times. My effort is to celebrate life, a genuine and pure life, highlighting hope and beauty in the heart of tragedy.’