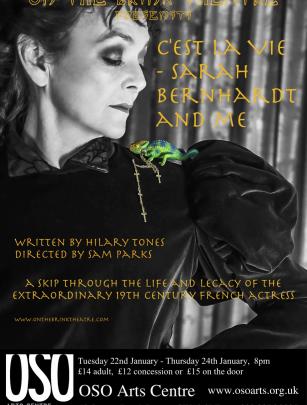 An actress nervously awaits a life-changing audition. As she travels on the tube she shares her concerns with the audience… “What is the director looking for? Will they like me? And who is Sarah Bernhardt anyway?”

‘C’est La Vie – Sarah Bernhardt and Me’ tells the story of the celebrated and pioneering 19th Century French actress who performed all over the world, becoming the first global superstar. Her sensuality and emotion captured the hearts and imagination of British audiences from London to Edinburgh, Portsmouth to Nottingham, who thrilled to her vivid ‘Frenchness’.

This seventy minute show written and performed by Hilary Tones incorporates film, music and authentic costumes and is suitable for anyone interested in theatre life - on stage and behind the scenes.

On The Brink Theatre invites you to join Sarah as she shares her extraordinary life and legacy.