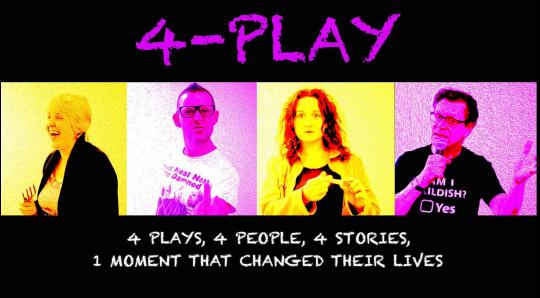 From the makers of 'The Nearly Men', Independent theatre company Burning Paper Productions present 4-Play, a new four part theatre production, bringing together four writers, each with a story to tell. Revealing their inner most thoughts and experiences, each play is performed by each writer, delving into a personal journey of self discovery and one moment that profoundly changed and defined their lives.

MY OLD MEN
In her play, 'My Old Men', Liz Lucas considers how experiencing a life changing event does not have to be a dramatic one. ‘My Old Men’, conveys how small things can alter the course of a life forever and how the circle of life is completed by the growing appreciation and understanding of two influential figures in one woman’s life and the simple giving of a free gift.

RAT
Rat Scabies was the drummer in the punk band, The Damned. Seeing them perform that night in 1982, profoundly affected writer and performer, Wasps vs Humans (aka Carl Antony Plover). From that moment on, he only ever wanted to be a drummer in a band. In 'Rat', he relives that gig, the excitement, noise, energy and even reimagines the mind of Rat himself tackling fame, fallouts, regret and ultimately changing his life forever.

TWO LINES
Directionless and trying to fit in, life takes a dramatic turn in Linda Plover's play 'Two Lines'. Confirming an unexpected pregnancy and a metaphor for change, this is a simple account of the experiences and challenges faced as a woman; from party girl to motherhood, she relives her past and lives out her moment.

THE SOFA
In 'The Sofa' Simon David Clark plays a stand up comedian moving in a new direction. This time he's telling the truth - and he's not too happy about it. He shares the two seminal moments in his life. Faith and love are his themes; hope is his target and will this routine ever be good enough for Edinburgh?

“4 seminal moments in the actors lives told with humour and passion. It made me have a think of some special moments in my life and realize how important they were in shaping my future. The art of story telling is alive and well in 4Play”
Pearse McCarthy, Ireland

"Candid and Heartwarming. I felt a resonance with each of them. An array of life moments and emotions not to be missed."
Pat Wonnacott, UK

"Captivating. Glowing and reeling......still. A must see. 4 moments that changed 4 lives, forever. From beginning to end, magnificent."
Andrea Ferguson, UK

"Amazing! Really well acted and thought provoking. Felt like we were there with you going back through history. Thank you 'all' for a wonderful insight and thoroughly enjoyable evening. X"
Lizzy East O'Brien, UK

"I thoroughly enjoyed it and would love to see more reflections from the 'characters' on other aspects of life. Well done again and don’t leave it too long before we can see more of you together again"
Emma Smith, UK

LIZ LUCAS
Liz has a background in directing, writing and performing and is a founding member of Lincoln Shakespeare company. Her diversity as an actor has seen her taking on roles from Cleopatra to Lear's Fool. As a drama teacher for many years, Liz has written a number of short plays and musicals for schools as well as directing and writing music for a number of independent shows.

As founder member of Vox Libris, she co-wrote a variety of murder mystery evenings before becoming founding member of the Indulgence theatre group.

As well as acting, Liz is no stranger to the live music scene in Lincoln as drummer for The Butler Family band and The Stand In Blues Band.

More recently, Liz wrote and performed her one woman show, 'The G-Man and Me' which sold out in Lincoln before going on to perform in Cork.