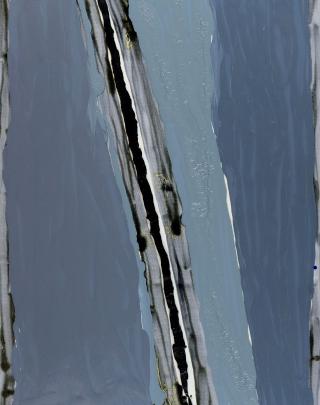 l’étrangère is proud to present Epiphany of Time, the first exhibition in the UK of work by the Polish artist, Boenna Biskupska. The exhibition showcases Biskupska’s ongoing series of paintings entitled Cages, many of which are shown here for the first time.

Each painting in the Cages series is created using thick layers of oil paint, confined within a rectangular boarder; some are ‘slashed’ through by thick diagonal lines or interrupted by additional rectangles within. The works are left to ‘ripen’ for a long period of time, often for a number of years until the artist decides to release them when they ‘mature’ enough. The materiality of paint, transformed by time, reveals colour and develops texture which adds a sculptural dimension to the work.

The process where time plays a central role in transforming the materials is key to Biskupska’s practice. Referencing existential and metaphysical issues such as mortality, aging, decay, as well as creativity, healing and wisdom that comes with time, imbues the paintings with a meditative and spiritual dimension.

The paintings can be seen to explore limitation or confinement and bring associations of fixed, enclosed boundaries. They also attempt to define the artist’s own creative space where she attempts to harness the process of the metamorphosis of paint. Thus, the work enables conditions which permit ‘something to happen’, providing the foundations for allowing the structure of the paintings to become stable. The fluidity and formlessness, often associated with the feminine, are fixed within the boundaries imposed by the artist that clearly reference geometric abstraction but through their expressive nature give the feeling of being in flux.