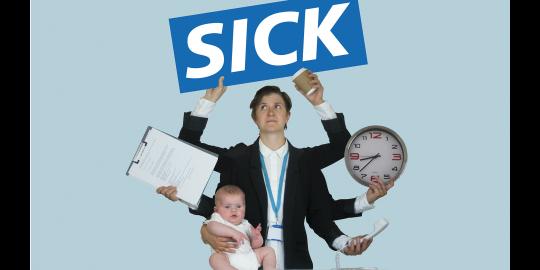 SICK is a funny, entertaining and at times tragic show about the impact of austerity on the National Health Service. As scriptwriter and performer Shey Hargreaves draws on her real life experience as a receptionist in a busy A&E unit, we find out how government funding cuts have impacted on patients, their families and friends and the staff who care for them.

Amidst the organised chaos of the emergency department, with queues in the waiting room, phlegm and bodily fluids aplenty and targets to meet, Shey attempts to remain calm and imperturbable. SICK gives us a behind-the-scenes insight into the relationships, protocols, and bureaucracy of the NHS and how it works. We also see glimpses of Shey’s personal life and her own coming-out story, leaving her boyfriend, meeting her wife and becoming a parent.

Littered with well timed jokes and frequently laugh out loud funny, whilst telling tragically sad stories, SICK is a bizarrely charming and entertaining show. A bittersweet study of what makes us human, and a funny and approachable call to political arms told in Hargreaves’ appealing, warm and honest style.

‘perfect for our times, and thanks to Hargreaves undeniable talent, a really enjoyable night out’ Outline magazine

Shey said, ‘During my years working on an emergency ward I saw the impact of government changes in health policy and what that meant for staff, patients and the NHS. When I left I decided to write about it, bringing issues down to individual true stories that help us understand what’s happing on a bigger scale. At the same time I wanted the show to be funny and entertaining as that actually helps get the serious point over. I don’t consider I’ve done my job unless people have had a Right Good Time’.

After leaving university with an MA in scriptwriting Shey worked as a receptionist on an Accident and Emergency unit for four years. Her desk was right in the middle of the ward and events unfolding around her the role gave her a unique viewpoint on life in the NHS. ‘The medical staff had to be so focussed and intense but while I was incredibly busy and right in the heart of it I had a unique viewpoint of the bigger picture and could see individual stories unfold’ added Shey.’

SICK is written and performed by Shey Hargreaves and directed by Molly Naylor.

Shey Hargreaves is a scriptwriter and performer. She studied at the University of East Anglia after which she trained to be a sushi chef before joining the NHS. She runs creative writing workshops and projects for the National Centre for Writing, British Art Show 8 and the Requiem project. SICK is her first autobiographical show.

Molly Naylor is co-writer and creator of Sky One sitcom After Hours. Molly wrote and performed the autobiographical show Whenever I Get Blown Up I Think Of You, which toured internationally and was adapted for BBC Radio 4. She recently directed her first short film, Callback.