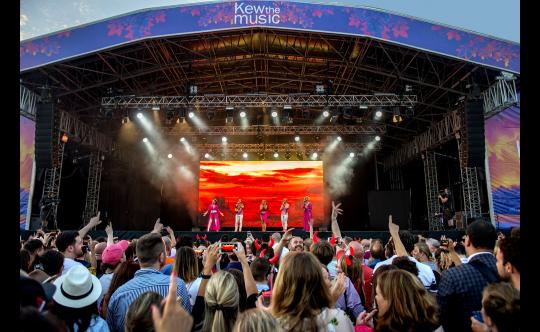 Tickets are now on sale and music-lovers can book ahead for the unmissable evenings at the iconic, atmospheric venue which returns from 9-14 July, 2019.

9 July - Beverley Knight + Billy Ocean
Both playing full headline sets, these two iconic artists make their Kew the Music debut. Queen of British soul Beverley Knight has impeccable credentials. With powerhouse vocals tinged with a raw honesty, she has sold over a million albums. She has won three MOBO Awards, nominated multiple times for Best Female at the Brits
and also received a prestigious Mercury Music Prize nomination. Billy Ocean is the biggest black recording star Britain has ever produced, selling over 30 million records to date. He reached Gold and Platinum status worldwide with hit after hit after hit –
from killer ballads like Suddenly to pop classics Love Really Hurts Without You and When The Going gets Tough. His latest album Here You Are featuring handpicked and reworked tracks entered the charts at his highest position since 1988.

10 July - Jess Glynne
It’s been a rollercoaster few years for Jess Glynne. I Cry When I Laugh is one of the defining British pop records of its era. It entered at number one, spawning 12million worldwide single sales, 39 weeks in the UK top 10, 2.5billion Spotify streams, a sold
out UK arena tour, Brit, MTV, EMA, Ivor Novello, MOBO, Q and Glamour Award nominations. In 2018 Jess scored a second UK number one with her much anticipated second album Always in Between. With monumental style, Jess brokers the hinterland between pop, soul, R&B, funk and house. She has an extraordinary alchemical touch
for turning out songs filled with hooks and harmonies that mean something to her and, at the same time, cast a spell over the rest of us.

11 July - Jools Holland and his Rhythm & Blues Orchestra
with special guest Alison Moyet Jools Holland returns this year with yet another crowd-pleasing show. Jools has been touring with his veritable musical army, the Rhythm & Blues Orchestra, for more than 25 years. He will be joined by special guests Pauline Black & Arthur “Gaps” Hendrickson from The Selecter and featuring Gilson Lavis alongside regular guest vocalists, Ruby
Turner and Louise Marshall. With a career spanning over thirty years, Alison Moyet is irrepressible and enduring. She began as one half of Yazoo, reinvented British dance music, merging cool synthesized soundscapes with soul. Critical acclaim, sold out tours, multiple top ten hits, a Grammy nomination and three BRIT awards later, Alison Moyet has clearly demonstrated why she is one of Britain’s finest recording artists. All nine of her studio
albums, and three compilation albums, have charted in the Top 30 UK Album Charts.

12 July - Craig David
With 15 Million albums sold worldwide and multi Grammy nominations as well as a top 10 billboard hit 7 Days, plus 4.5 million single sales and 290 million single streams in the last year alone – Craig David is the most talked about return to music in decades!
A contemporary R&B singer, songwriter and rapper, Craig David’s debut studio album, Born to Do It, was released in 2000, after which he has released a further five studio albums earning himself 20 UK Top 40 singles, and seven UK Top 40 albums, David’s latest album The Time is Now is an exciting stylistic mix.