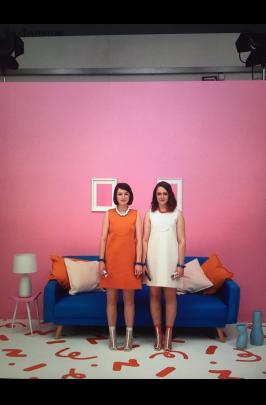 The wonderful Stiff & Kitsch musical comedy duo will be performing at the stylish Lady Hamilton pub in Kentish Town in order to raise money for ActionAid. They've been described by the British Comedy Guide as an example of a "Perfectly executed modern musical comedy that had the audience in stitches"! They'll also be performing at the Edinburgh Fringe festival this year, so it's a rare opportunity to see them perform before then.

The very talented Tara Newton-Wordsworth is also performing, which means you get to see her before her run at Edinburgh festival. Tara Newton-Wordsworth is a comic, actor, wife and mum. She performed in renowned London based comedy sketch show 'NewsRevue', subsequently directing and co-writing the Edinburgh Fringe run of the show at Pleasance Courtyard, which The Sun called ‘One of the slickest, most professional, hilarious shows you will ever see’. This year she is taking her debut stand up hour 'Motherhood: A Comedy' to Just The Tonic at Edinburgh Festival Fringe.

There will be other acts performing too, including my good friend Scarlett Wrench who runs a wonderful story-telling night, John Steel (this might be the first time you see a CEO perform stand up) and we also have a very special guest, who is regularly on Panel shows & has her own Netflix show...

Plus we’ll have a raffle and a fully stocked bar- which is the best way (in my opinion) to enjoy an evening of musical (and non-musical) comedy!