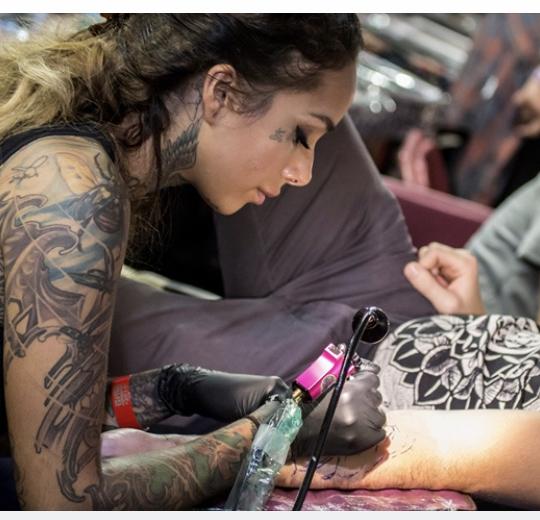 Buy the 2019 Advance 3 Day Pass and get Saturday for FREE! kingpintickets.com
Advance tickets will be available to buy online until Thursday 26th Sept, Midnight.

With this 15th anniversary edition, expect to see 400 of the most influential tattoo artists in the world, creating some awe-inspiring designs for tattoo aficionados.

Opening the weekend will be a traditional blessing ceremony by highly regarded Samoan tattooist, Lawrence Ah Ching in the ever popular hand-tapping tattooing area at the Dockside Gallery.

Jaw dropping tattoos will be fiercely debated in the daily tattoo competitions, with renowned guest judges including the King of black and grey and inker to the likes of David Beckham and Johnny Depp - Mark Mahoney, and leading Swiss artist Filip Leu- on hand to make those tough decisions. The public even get a chance to vote in advance for, ‘The People’s Choice Award’ with the coveted award handed out on the Sunday.

Plus the UK’s oldest tattooist, 86 year old Plymouth based, Doc Price will ink his last ever tattoo at LTC, he lays down his needle after seven decades of decorating somewhere between 28 and 40 acres of skin.

New this year, we are teaming up with Vans, to bring you are first ever half pipe skating ramp – ‘Ramp Jam’ at the LTC. Join us to witness demos from Vans Europe pro riders, champion UK skaters and special appearance from skateboarding legend, Steve Olson. Even get on board yourself with the chance to take part in free skate lessons throughout the weekend.

Another first appearance will be Figure of A, exploring in both performance and art the beauty of tight binding Shibari -Japanese style rope bondage, using striking patterns to entwine individuals and other surprises in live suspension shows.

Much more than just tattoos there will be breathtaking fire and aerial performances from The Fuel Girls and live music from The Quireboys, Never The Bride, Hell’s Bells (AC/DC tribute) and Urban Voodoo Machine. Gretsch Guitars Roadhouse stage sees live blues from The Grimms, Big Joe Louis and Dusk Brothers and the chance enter a charity auction for Nordoff Robbins to win one of five customised guitars being displayed over the weekend.

Or indulge in a some shopping at our selection of alternative traders selling everything from unique fine jewellery to taxidermy. Then sample the most delicious street food from our sun drenched dockside, enjoying award-winning Beavertown and Lagunitas craft beers, sipping Makers Mark Whiskey or relaxing with a Jim Beam & Naked Grouse cocktail or mocktails at our summer inspired bars. Specially curated art exhibition and workshop areas give insight into the history of tattoo art and how the culture has developed.

London Tattoo Convention is the UK’s only convention committed to reducing plastic and using eco-friendly products from suppliers Killer Ink and have joined forces with Sea Shepherd on various future initiatives to help this a marine conservation charity protects ecosystems along the UK’s coastline.