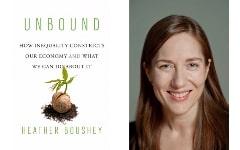 Economic growth has not only a rate but also a direction. IIPP brings that directionality to the fore, creating a new framework for public policy grounded in concepts of public value and public purpose—and the implications of such value creation for growth that is more inclusive and sustainable. Rather than extracting value, we need to direct innovation towards sustainable development in order to address grand societal challenges such as poverty, global warming, resilient health systems, and the future of mobility. Such transformation is at the heart of where IIPP works, and will be explored in this talk by Heather Boushey.

The New York Times has called Heather Boushey one of the “most vibrant voices in the field,” and Politico twice named her one of the top 50 “thinkers, doers and visionaries transforming American politics.” She previously served as chief economist for Secretary of State Hillary Clinton’s 2016 presidential transition team and as an economist for the Center for American Progress, the Joint Economic Committee of the U.S. Congress, the Center for Economic and Policy Research, and the Economic Policy Institute.

Heather Boushey is the President & CEO and co-founder of the Washington Center for Equitable Growth, which was launched in 2013. She is one of the United States’ most influential voices on economic policy and a leading economist who focuses on the intersection between economic inequality, growth, and public policy. Her latest book is Unbound: How Economic Inequality Constricts Our Economy and What We Can Do About It (Harvard University Press).

We will also be holding a drinks reception afterwards which everyone is welcome to join.