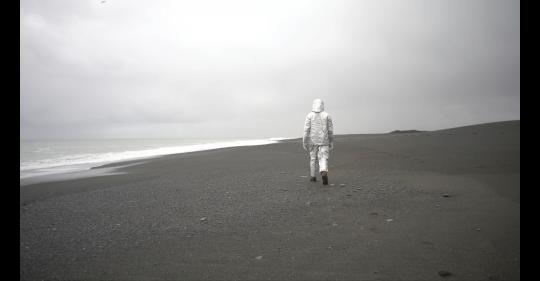 Ramsay makes performances, films, music, collage and poems. His recent work has been shown at Art Basel, Camden Arts Centre, Internationales Künstlerhaus Villa Concordia and the Barbican. His background is in theatre and the DIY music scene— he trained at Ecole Jacques Lecoq and plays in multiple music collaborations. Ramsay says: ‘I see it as all part of the same thing really, movement, emotion, form or lack of it. Configuring reality as feels right in the moment.’

Volcanoes & Regret is the culmination of a three-year project that pivots around the act of burning human regrets in volcanoes. It includes three films, a live sonic installation and a Volvo 240 estate car encased in a volcano proof suit.

In 2017 and again in 2018, George invited people through an online callout to write down their regrets, so that he could take them to an active volcano to burn them. He received more than 200 replies. He says: ‘Our weakness connects us, when you read a stranger’s regrets you feel strangely close with them, an unspoken intimate bond is formed, sometimes across continents. I wanted to take them to a volcano to burn because this seems like the only logical thing to do.’

He began the films in 2017, travelling to Mount Etna, Sicily, Italy, then in 2018 to the remote volcanic peninsula of Kamchatka. ‘I had no idea what I was doing, when I went into the crater on Etna I couldn’t breathe. I said to myself why I didn’t know more about this. Looking into the mouth of an active volcano, hearing it gurgle and explode is the most beautiful experience I can conceive of. The history of our planet is more volcanic that it is anything else. These are our ancestors.’

Book of Regrets: For Kamchatka documents the 4593 mile journey to Kamchatka by train, takes in local indigenous legends about volcanoes and witnesses the moment that the book of regrets is hurled into the inferno.

The second film, Stromboli: Interview with a Volcano, is a short dialogue between George and the volcanic island Stromboli. Meanwhile, Vulva to Ulva records his journey to Ulva, a prehistoric volcano off the Isle of Mull, in his car Vulva. A sort of an origin story.
The Sonic Installation, Volcano Lover, is described as ‘an array of sound making machines, often of domestic or geological bent, which respond to live volcanic data’. At the exhibition private view on 26 October this will be activated by live performance from Ramsay, who attempts to communicate with volcanoes using voice, drone, ecstatic movement and telepathy.

Finally, V is for Volvo, Vulva, Volcano, is an installation formed of the artist’s Volvo 240, which is renamed Vulva and cloaked in a volcano-proof suit, with an ashen volcanic landscape in her boot. Vulva to Ulva will be projected onto the car’s windscreen.

Volcanoes & Regret is supported with a Public Engagement Grant from University of Oxford. Project producer is Joanne Matthews.

Workshops
23 October: Unfold Yr Own Myth — a workshop on creativity and ritual for adults.
25 November: My Neighbour The Volcano — a workshop for school