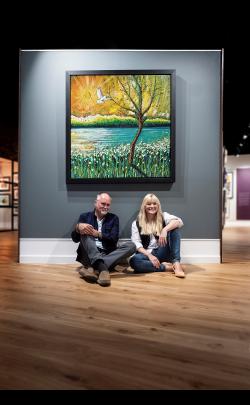 The final instalment of a unique augmented reality art experience, brought to life with performances by actors including Sean Bean, Charlotte Riley, Vicky McClure, Christopher Eccleston, Stephen Graham and Sophie Okonedo, will be unveiled at the National Army Museum in Chelsea later this month.
Named after the last tree standing on the battlefield of Beaumont-Hamel, The Danger Tree, by oil painter Scarlett Raven and digital artist Marc Marot, explores true stories of World War One through paint, animation, music and poetry.

The project was credited at its launch as being the world’s first augmented reality fine art exhibition, with its inspiration in part coming from the first hand experiences of Marc’s grandfather by marriage, Private Eddie Bigwood. Eddie joined the Bristol Pals’ Brigade as a 17-year-old in 1914 and, despite suffering a terrible facial injury during the Somme offensive, was patched up and sent back to the Western Front. He survived the duration of the war and died aged 100 in 1998. One of the last 10 British survivors of the Great War, he finally began recounting his experiences in his last 20 years. This had a lasting emotional impact on Marc and many years later, having seen Scarlett’s poignant poppy paintings and learned that she mixed the paint she used with soil taken from the Flanders battlefields by her father Raphael Ravenscroft, he proposed a new experiment utilising augmented reality, and thus the seeds for The Danger Tree were sown.
Eddie’s stories are encapsulated in the painting Shall I Sing to You, which will be on display at the National Army Museum along with 11 other Scarlett Raven paintings. The paintings feature some of World War One’s greatest poetry from Wilfred Owen, Rupert Brooke and Siegfried Sassoon, as well as former poet laureate Carol Ann Duffy.

Marc and Scarlett use traditional stop motion animation to capture every daub of paint as it is added to the canvas. This is then integrated with the narration, archive film, photography and music, resulting in an emotional impact that has brought audiences to tears.

The National Army Museum exhibition is the last in a series of 10 that have toured the country at prestigious venues including Titanic Belfast, the Martin Luther King Jnr Building in Liverpool and Manchester Central Library. Having attracted over 75,000 visitors since its launch on 1st July 2016, the unique body of work has received wide critical acclaim and it is especially poignant to be ending its journey at the National Army Museum.

Opening on 31st October and continuing until 5th January 2020, the exhibition coincides with the 100th anniversary of the first Armistice after the cessation of the conflict, and appropriately Scarlett and Marc have created a ‘peace painting’ titled Washed By The Rivers specifically for the museum.

Through the use of the app Artivive, visitors can use tablets and headphones provided by the National Army Museum, or their own personal devices, to interact with the soldiers’ experiences. Whilst the paintings appear conventional at first glance, the augmented reality technology allows the viewer to unlock hidden depths by digitally stripping away the countless layers of paint to unlock the creative journey of each painting and see the Great War reimagined.

Original paintings and limited edition prints from the exhibition will be available to purchase via Castle Fine Art in the National Army Museum shop for the duration of the show, and Scarlett Raven and Marc Marot will make a personal appearance at the museum on Wednesday 30th October from 6:30pm. Visitors will have the opportunity to learn about The Danger Tree journey so far, including the inspirations and techniques behind the collection, as they mark the swansong of the successful project.