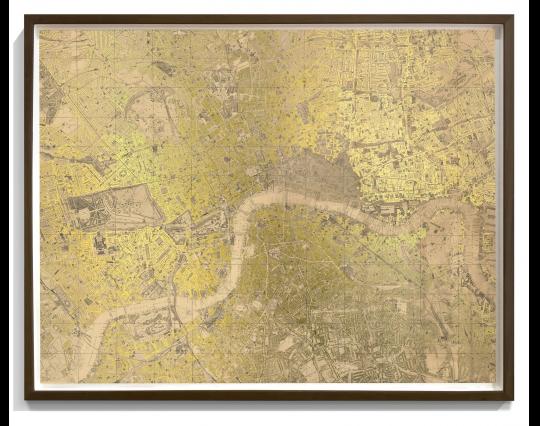 Eason is a London based artist, who since 2010, has steadily attracted the attention of institutions like the Barbican, the RA and Christies. His stunning collection of gold circular maps, have also featured in the Sunday Times Style Magazine, World of Interiors and BBC’s The Night Manager. Simply put, he produces contemporary maps of major cities, gilded in gold and silver leaf. The overall effect is arresting. Iconic topographical surfaces in shimmering precious metals create an understandably, powerful and abstract beauty. And then your eye zooms in to an intricate network of connective tissue made up of places and rivers – all of which you realise will be rewritten in as little as a decade.

Our fascination with maps is well known. These navigational tools have taken many forms over the years and have always had a powerful effect on the imagination. Eason’s study of historical maps, in particular, the discovery of the Victorian Sociologist Charles Booth’s ‘poverty maps’, colour coded in black, red and yellow to mark the working, middle and upper classes, moved him to explore the idea of ‘art as documentation’; precious snapshots of an ever-changing landscape whereby the colours themselves create an alternative abstract map within a map. The use of precious metals and carefully selected colours is to help the viewer ‘focus on the sacredness and diversity of our living landscapes’ he says. The flattened surfaces in gold or silver soften our gaze to reveal what he calls the ‘egalitarian nature of the city’. He is captivated by the birds-eye-view – an experience he enjoys when he’s in a plane looking down. His process of working is almost alchemical in its technical precision, resulting in a distilled abstraction of information made up of the microscopic realities of organic and man-made patterns. From his obvious love and dedication to the art of cartography, one begins to understand why maps have functioned as a tool for the more ethereal and spiritual as well, in art forms like the Buddhist Mandalas.