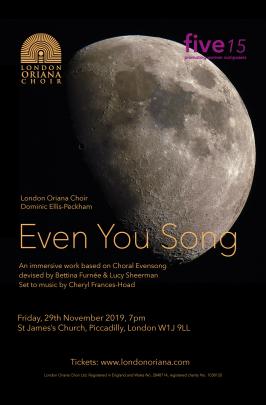 An immersive work based on Choral Evensong by artist Bettina Furnée and writer Lucy Sheerman, set to music by celebrated composer Cheryl Frances-Hoad. Candid responses from interviews with twelve couples about a potential trip to the moon form the basis of a libretto which echoes the format of Evensong. Sung by adult and children’s choirs against a backdrop of digital projections and new writing by Sara Maitland.

This performance marks the fiftieth anniversary of the first moon landing. It captures the feelings of doubt and excitement faced by astronauts, and by ordinary people, as they take a leap into the unknown. (Apollo 12 landed in the Ocean of Storms on 19 November, 1969 and returned to earth on 24 November.)