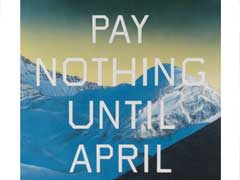 On a 1963 business card, Ed Ruscha explained how to pronounce his name (‘ED-WERD REW-SHAY’) and described himself simply as ‘young artist’. He began his career creating commercial graphics for a Los Angeles advertising agency in the 1960s. His subsequent work often references advertising, both in themes and technique. How words, sounds and images relate to each other is an ongoing fascination.

Using eye-catching type, Ruscha makes us expect a straightforward advertising slogan. Instead, he creates strange or contradictory images. He has said, ‘I’ve always had a deep respect for things that are odd, for things that cannot be explained. Explanations seem to me to sort of finish things off’.

This display reflects the range of Ruscha’s practice, including paintings, prints and photographic books. It includes examples of his use of unusual substances. DANCE? 1973 was made using coffee, egg white and mustard. Ruscha often draws inspiration from his adopted hometown of Los Angeles. Its architecture and imagery feature in much of his work. Full of irony and humour, his works can also be interpreted as commentaries on American society.

Ed Ruscha was born in 1937 in Omaha, Nebraska, USA. He lives and works in Los Angeles.