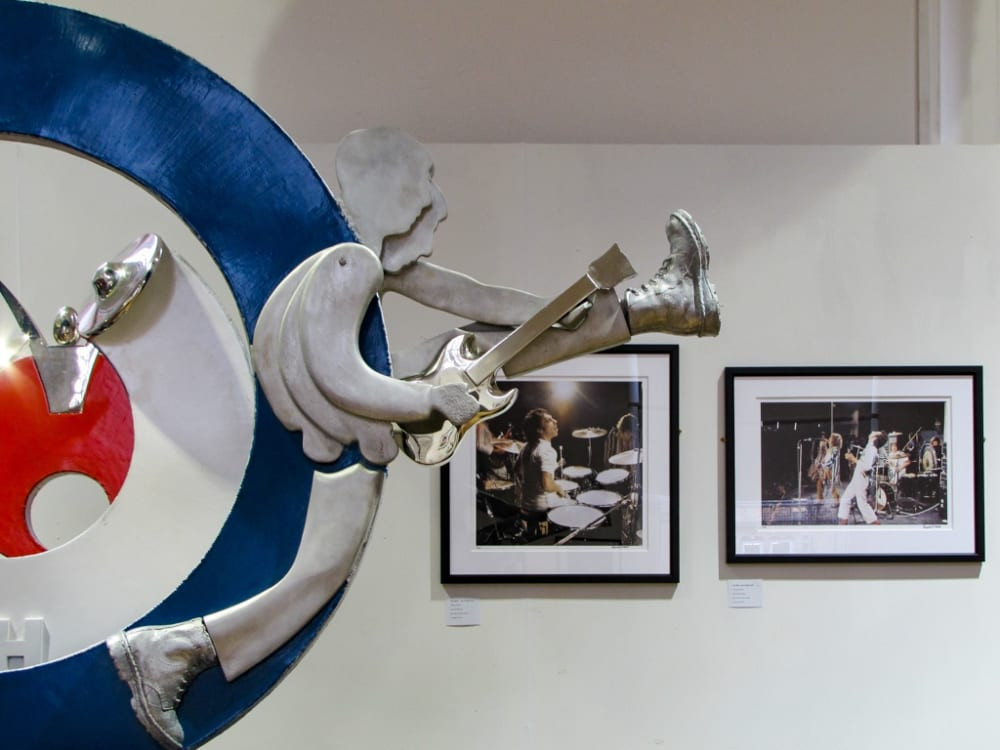 Ad
Covid 19 Information
Due to Covid-19 restrictions, the exhibition is by appointment only. The gallery will be cleaned between events and PPE will be available on site.
When

Free
Note: Due to Covid-19 restrictions, the exhibition is by appointment only.

The directors of Masterpiece Art are delighted to present Wight Spirit, 1968-70, an exhibition celebrating the fiftieth anniversary of the seminal Isle of Wight Festival. Opening on Monday 27 July, the show is comprised of new sculptures by Guy Portelli and a selection of photographs — some never seen before — taken by the late Charles Everest. In addition, the gallery has created a feature-length documentary which will bring to light the festival’s history and legacy.

When it began in 1968, 10,000 people attended the event, but by 1970 this had swelled to 600,000. That year the line-up included Jimi Hendrix, The Who and the Doors, and was a landmark in Britain’s cultural history, as well as serving as the progenitor for countless other open-air festivals.

Guy Portelli, who has curated the show, says: ‘The Isle of Wight Festival is Europe’s Woodstock. You could argue it has more significance, and yet it isn’t venerated in the same way. I am not sure why that is, given the bands that played there and the huge number of people it attracted. My hope is that this exhibition, along with the accompanying film, will help redress that.’

The centrepiece of the exhibition is Portelli’s large-scale glass mosaic panel. Entitled Wight Spirit, it features the handprints of more than 80 musicians who performed at the festival, including members of Jefferson Airplane, Free, Pretty Things and The Move. Showing alongside the sculptural works are over 60 photographs taken by Charles Everest (1929- 2015) at the 1970 event. A highly successful newsreel cameraman and stills photographer, Everest worked as a Press liaison for the festival organisers. In return for his services, he received unparalleled access to the performances on stage. Realised in collaboration with CameronLife Photo Library, this exhibition will see limited editions of Everest’s work available for the first time. WIGHT SPIRIT, 1968-70, The Documentary has been made in partnership with Blood Orange Film and features archival footage and interviews with eminent figures connected to the festival’s legacy.

It will also include live shows performed by some of the musicians who played at the festival from 1968-70. These will take place at the central London studio and showroom of guitar brand Gibson in August. Masterpiece Art will also stage a one-day exhibition to mark the 50th anniversary of Jimi Hendrix’s death on 18 September. Says Alex Cousens, Executive Gallery Manager and Sales Director at Masterpiece Art: ‘We’re honoured to be marking the fiftieth anniversary of this seminal festival, and especially pleased to be showing Guy Portelli’s astonishing mosaic and Charles Everest’s photographs. Together with the film, they eloquently capture the spirit and magic of those times.’

Note: Due to Covid-19 restrictions, the exhibition is by appointment only. Please contact by telephone, 020 3946 7881. About Guy Portelli Guy Portelli, b. 1957, Durban, South Africa, studied Interior Design and 3D Design at Medway College of Art. He worked for the BBC in their special effects department, before setting up his own studio in 1981. He was elected as member of both the Royal British Society of Sculptors and the Royal Society of British Artists, for which he later became Vice President. In 2008, he appeared on the BBC television show Dragons Den, where he won an investment of £80,000 for his Pop Icon collection. Other works by Portelli include the Gloucester Road Underground installation SEELIFE (2002), the sculpture ‘Peace and Love’, commissioned by Ringo Starr and currently on public display in Beverley Hills, and his Pop Icon collection, shown at London’s Mall Galleries in 2009 and featuring sculptures of musicians such as David Bowie, John Lennon and Bob Marley. About Charles Everest Charles Everest (1929 – 2015) was an award-winning newsreel cameraman, film director and stills photographer. His work has been included in exhibitions at Swansea Museum (Swansea, 2011), Gallery Different (London, 2012 and 2013), and Dimbola Lodge (Isle of Wight, 2013). About the Isle of Wight Festival The first Isle of Wight Festival was held in 1968 at Ford Farm, near Godshill, Isle of Wight, in September 1968. It was attended by about 10,000 people, with Jefferson Airplane headlining. A year later, Bob Dylan, The Band, The Nice, The Pretty Things, Marsha Hunt, The Who and Joe Cocker played before an audience of 150,000. Many celebrities of the day also attended that year, including John Lennon and Yoko Ono, George Harrison with Pattie Boyd, Ringo Starr with Maureen Starkey, Keith Richards and Jane Fonda. In 1970, 600,000 — 700,000 turned up to see Jimi Hendrix, Miles Davis, Jethro Tull, Chicago, The Doors, The Who (whose set produced a live album), Emerson, Lake & Palmer, The Moody Blues, Joan Baez, Free, Joni Mitchell, Leonard Cohen, Kris Kristofferson and Donovan, amongst others. The unexpectedly high attendance levels led, in 1971, to Parliament adding a section to the Isle of Wight County Council Act 1971 preventing overnight open-air gatherings of more than 5,000 people on the island without a special licence from the council. About Masterpiece Art Established in 2019, Masterpiece Art is based in Holland Park, London. Previous shows include Prime Cuts Vol. 1, an exhibition of portraits from British artist Keith Haynes, and Modern Girl, the debut UK exhibition of Canada-based artist Dina Goldstein. Wight Spirit, 1968-70 is their fourth major exhibition. Masterpiece Art 3 Norland Place London, W11 4QG (00 44) 020 3946 7881 https://masterpieceart.co.uk