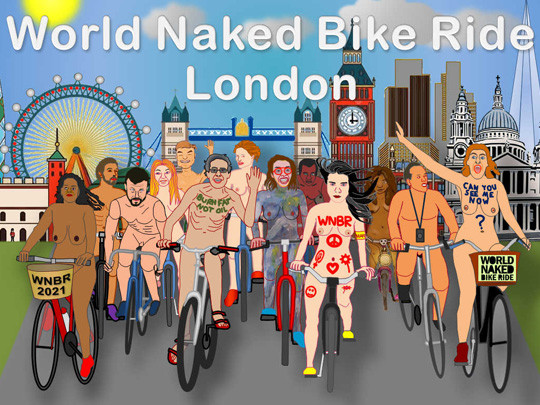 The next annual WNBR London Naked Bike Ride is planned to be on the afternoon of Saturday 14th August 2021. It's free, it's fun, it's legal and it's making the world a better place for everyone by promoting cleaner environment, safer roads, healthier lifestyles, and better attitudes.
We have been riding annually since 2004. In 2020 we did not ride because of the pandemic. The 2019 ride was on 8th June and had starts from Tower Hill, Regents Park, Deptford, West Norwood, Hyde Park, Clapham Junction, and Kew Bridge.
As well as our global campaign themes we are also keen to make the point that cycling and WNBR should be for everyone - in response to the controversy and debate when the Mayor’s cycling and walking commissioner spoke of middle-aged men cycling faster around the city. Too few women and people from ethnic minority groups cycle in London. More must be done to promote diversity among a largely white, male and middle class biking community, the city’s walking and cycling commissioner has said. Figures show black, Asian and minority ethnic groups account for just 15 per cent of the city’s cycle trips.